SAV LIOTTA talks to artist MARK WARDEL for March 2016 issue of DESIGN SCENE Magazine out now in PRINT and DIGITAL. After finishing art school in his native Liverpool he headed for London and gravitated towards the post punk club scene of the late 70s/early80s where he became “court painter” to the luminaries of the Blitz and other London cafe society hang outs such as Legends and the Embassy club, producing portraits of future stars like Boy George, Steve Strange and David Sylvian of the group Japan, while at the same time, documenting this scene in a unique collection of polaroid photographs as recently featured in high-end London fashion magazine Wylde. In 1986 he met Andy Warhol who, impressed by his work purchased one of the hand painted t’shirts Mark was producing for London’s Paul Smith shop.

Sometimes working under the pseudonym TradeMark, a name he got from his association producing artwork and “disco decor” visuals for cult London after hours club Trade,his sharp, semi hyper- realistic oil and acrylic paintings have been widely exhibited to worldwide acclaim in museums and galleries and have graced covers, campaigns and commissions for, amongst others….Defected records/Glitterbox, Space club Ibiza, V&A museum London, The Ministry Of Sound London, Kylie Minogue, Absolut Vodka and  Boy George.

Mark Wardel’s artworks are in the collections of prominent entertainment industry figures including David Bowie amongst other A-list collectors and his work has been featured in publications including GQ Style, The (London) Times, Dazed and Confused, London Evening Standard, Time Out, I.D magazine, The Face, Gay Times, and Attitude.

SAV :Mark So where do we start? I have so many things to ask you… When did you decide that you would become an artist ?

MARK  : There was never any question of deciding, I always knew from an early age that I would be involved in some aspect of the arts whether that be painting, graphics, design or illustration. As it happens, over the years I have had experience in all those areas. SAV :Has the club scene of the late 70’s and early 80’s influenced your art? It was a flurry of music, fashion new phenomena. It was an air of total innovation

MARK : The London club scene of the late 70s/early 80s was a huge influence not only on my art but on my direction in life. After I finished art school in Liverpool I headed straight to London seeking a life of style, panache, art and glamour. The London scene of that time was amazingly vibrant and inspiring as a whole generation “the children of Ziggy Stardust” had grown up and started their own scene at underground clubs such as the Blitz and Billy’s which also intersected and cross-pollinated with high-society in chic disco palaces like The Embassy Club and Legends. Former punks such as Boy George and Steve Strange had rejected the nihilism of the punk movement and embraced self expression as an art form and as soon as I set eyes on these amazing self-created creatures I knew I had found my world and my subject . In fact Boy George was the first real portrait I ever painted long before he became known and he says to this day that it made him feel like a star before he became one. SAV :Tell us about your David Bowie life mask sculptures

MARK : In 2013 the V&A museum commissioned a limited edition of my “Silver Duke” David Bowie life mask sculptures as part of the blockbusting “David Bowie Is” exhibition. The mask is based on a 1975 life cast of Bowie from which I created an enhanced sculpture. The edition of 300 silver masks completely sold out and I have since produced variations on these, two of which David Bowie himself bought from me for inclusion in the official David Bowie archive . In February 2016 the BBC’s flagship arts programme Artsnight featured a filmed report on my Bowie masks and how I have incorporated them into my other artworks. SAV : Your works have a strong visual impact, bordering on fashion imagery and are sometimes provocative. More than an artist, I think you’re very artistic views, such as photography, fashion magazines, or even as a fashion designer, could there be future collaborations in these areas?

MARK : My work has always crossed over into other areas such as fashion, music and the club world. These worlds influence me and I in turn can influence them, it’s like a circuit feeding back into itself where possible future collaborations are always a possibility.

SAV: Tell us about the paintings of Kate Moss and David Bowie with bloody noses.

MARK: These works were inspired by a scene in the film The Man Who Fell To Earth where David Bowie’s character who is an alien finds it difficult adapting to the atmospheres of Earth and the force of a lift ascending causes his nose to bleed. I perceived this stream of blood as a metaphor for pressure, stress, alienation etc. and of course, there is also the drug connotation. Having past experience of such things myself I decided to use this visual idea in a series of paintings ….. I really like the graphic impact of bight red against monochrome.

SAV : Your paintings express the total beauty of aesthetic perfection. What is beauty for you?

MARK :Physical beauty definitely comes from good bone structure, although actually I find that “beauty” in itself can be bland and un-interesting. I am much more interested in style and individuality, strong visual statements. A lot of my “portraits” are actually constructed identities made up of elements taken from different visual sources and put together to create a semi-realistic but un-real image of seeming perfection but in reality, a Frankenstein SAV : Mark can you describe your first reaction, when you learned about of the death of David Bowie

MARK :Strangely, I had slept really badly and for some reason I kept waking up every hour or so and then my phone started beeping at about 6 am…I ignored it but as more messages started coming through I knew something bad had happened….something very bad….I didn’t know how I felt…I was just numb and feeling nothing but everything simultaneously…I still feel numb and oddly disconnected about it…very strange and difficult to process.

SAV: When did you meet him?

MARK :I met him in my friend’s nightclub in London in September 1979 …he had written to me from Berlin a few months earlier after I had passed a picture I had done of him to one of his staff to give to him. He was very charming and we chatted for a few minutes. I never met him again although I must have been ‘on his radar’ due to him buying 2 of my mask sculptures. SAV : What about a BBC documentary?

MARK :This was arranged last December and I had to film it the morning after he died which created a very different vibe about the piece. They had to edit a lot of footage down to fit the format of the show but liked it so much that they may do a longer piece in future. Sky Arts are also interested in doing a piece about me.

SAV : What kind of development will your art have?

MARK :I have started to introduce elements of stencilling into my work which enables me to explore multiples more easily…also I feel I have exhausted the possibilities of a ‘celebrity’ aspect of my subjects…’celebrities’ have lost their allure and I am becoming more drawn to the anonymous. I want to create ‘armies’ of anonymous ‘clone’ paintings next. 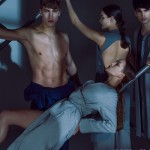 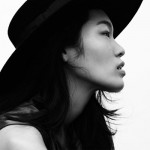