“In the first place, I never set out to be an actress in the way that so many people do, and I suppose I feel a little sheepish about that, since so many times it is how I am described. I feel it is a case of mistaken identity. I never had—and this still holds true today—anything invested in the notion of acting, of being “a good actor.” As it happens, what is considered “good acting” is very often, still, an anathema to me. I’m a bit of a philistine when it comes to not being interested in quivering lips and controlled articulacy and “searing” realism. I have a love of mess and awkwardness and the inexpressible nonsense of our inarticulacy. Dress-up and ambiguity and the vagaries of identity have always interested me the most.
I was always a writer and got into university on the grounds of my writing. I only started performing—in undergraduate productions—when my writing deserted me and I found myself drawn to the company of some like-minded people who were putting on plays—for the company, purely, and for the fun of the joint endeavor. I suppose, when I split this hair between terms, “performer” versus “actress,” there is the consideration of authorship which I never felt I relinquished, even while I was not writing for many years. I never feel like an interpreter of another’s text. My love of live music, of stand-up, of opera, of dance sustains my love of live performance in a way that the theater never has.” – Tilda on identifying as a performer and not as an actress. 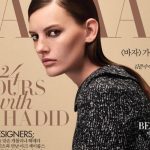 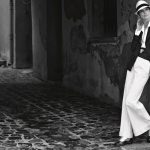