‘I’ve done Axel Rose and Slash, Keith Richards, Ziggy Stardust, Blades of Glory, Mickey Rourke in The Wrestler. I think it’s too boring to be like “Oh I’m a sexy nurse”, I’m always like “Err, what even is that… that’s not even funny.”’

HARRIET MAY catches up with our D’SCENE MAGAZINE cover star to talk fashion shows, all things reality television and the state the modelling industry.

A tomboy who was a Victoria’s Secret Angel, a football obsessive turned fashion industry success story, a model who talks about her Halloween outfits as fondly as the top designers who’ve dressed her; Caroline Winberg has always been a wildcard in the modelling industry. A woman who describes herself as a ‘no haired, no hipped model who stylists always dress as Barbie’, who prefers to watch football than talk about clothes, and stars in women’s magazines but buys men’s. She is an opinionated career woman with a hectic schedule, and family-orientated wife and mother. Winberg has been in the modelling industry since her early teens; a Scandi bombshell and Victoria’s Secret Angel who accompanied Bradley Cooper to the Met Ball. Someone who – despite all your pledges to womanhood and feminism – a little part of you would love to dislike. Winberg is this woman, but she is also endearing, warm and gregarious. A football playing tomboy who’s had a male Halloween costume as far back as she can remember; an anecdote that surmises the attitude that has carried her throughout her career and in her life day to day. For Winberg being sexy isn’t enough, you’ve got to be funny too.

Spotted aged fifteen by talent scout Cesar Wintland on her way to football practice, Caroline thought he was joking when he asked her if she’d ever considered modelling, ‘I was late for football training, plus I had to make sure he wasn’t some pervert’. Watch out fashion industry, this girl’s going to speak her mind. From the beginning of her career she was headstrong and it paid off in dividends. At sixteen most teenage girls are struggling to get up for school each day, working a few hours a week in a local café, and racking up huge phone bills for parents giggling to boys into the small hours of the night. Winberg was shooting her first Vogue cover and being wooed by rockstars. Models have to have tenacity to survive the fashion industry and Winberg has that in abundance. In 2013 she came to mainstream attention in the UK when she worked on the hugely entertaining (and underrated) UK edition of hit US television series The Face. Competing alongside ever-gentlemanly Erin O’Connor and notorious Naomi Campbell to find the next face of Max Factor, Winberg had an an angel on one shoulder and a devil on another. ‘At first I thought Naomi was joking when she was yelling on camera, but the cameras stopped and she didn’t,’ Caroline laughs, ‘I’m always joking with my friends so I kept winding her up, and after a few days we started going for drinks after filming.’ Campbell called her ‘harsh’ on camera during filming, which is quite the accolade. Falling somewhere in the middle of the two judges, the audience warmed to this golden-locked, angel-faced mediator from whose cherubic lips spills the husky guttural laugh of an enfant terrible.

Nowhere is this juxtaposition more present than during her six year tenure guarding the gates of fashion heaven as a Victoria’s Secret Angel until 2011. Victoria’s Secret, a lingerie company initially known for the huge turnover it achieved from the sale of its catalogues (at one time making up 55% of the company’s business), triggered many a boy’s sexual awakening in the 1980s and 1990s. Today no longer just the subject of the male gaze, the company attracts just as many female fans and being chosen as a Victoria’s Secret Angel is honourable recognition that you’re at the peak of your career. Go on YouTube and watch Winberg walk the catwalk; in front of the camera she is the consummate profession, all big grin, bouncy walk and powerful stance. She is untouchable.

Backstage it was a different story, ‘It used to be all wine and ciggies and running into each other’s dressing rooms, then we’d hit the town.’ she confides, ‘Now everyone just works out, I’ve never seen so much working out’. She laments the loss of the naïvety of a pre-social media industry. Now that everything is recorded, every moment voluntarily papped by the models themselves and the paparazzi, modelling is no longer a job but a lifestyle. Supermodels are no longer falling out of clubs; they’re filling up their Nutri-bullet. ‘A friend I used to work with said to me the other day, “It just used to be so much fun.”’ It is an unanticipated symptom of lives lived online that with communication at its easiest the industry feels colder and more lonely; now it only appears ‘fun’ on Instagram. Competition for jobs amongst girls is fierce, ‘We were friends; we all used to speak on the phone because we were lonely, it wasn’t competitive. If someone was going to the Bahamas for a shoot we’d just ask when they were back, not “Who are you going with?” or “Hey I was an option on that shoot”’. Shows such as The Face, or Top Model Sverige (Sweden’s Next Top Model, season three and four of which Winberg hosted) play on this competition. Before committing to these shows, Winberg publicly criticised the process saying, ‘No one wants to hire someone who’s made a fool of themselves on TV’. Having worked on these shows she still stands by this statement, ‘If you’re acting like a crazy person on a show then I believe no one’s going to want to hire you’, however she does still believe in their career-building power, ‘With Sweden’s Next Top Model the person who won (Josefin Gustafsson) was the one who made the least fuss throughout filming. She’s gone on the have a great success and got an exclusive with Alexander Wang straight after’. If you’re serious about the industry Winberg recommends that you don’t play up, instead channel your playfulness into shoots. Producers on these shows juggle the girls’ characters and play on catfight stereotypes; ‘You can’t just have ten nice models who are going to go to bed at 9pm; there’s always going to be the feisty one, the sensitive one, but they have to complement each other.’

A lack of access to social media at the start of career has not affected Winberg’s achievements. Boasting a diverse CV that includes modeling, presenting and acting (she appeared in the 2011 film Limitless, alongside Bradley Cooper and Robert De Niro), Winberg has become known not just as a face but as a personality. Does she think models have to become a brand now to remain successful? ‘We used to do six shows a day for a month, now a model will come to a city for a week, bring their hair and makeup artists and go to parties and all that needs to be paid for.’ And they need to brand themselves to pay for it. Because of the rise of street style photographers and bloggers, models are celebrities, ‘It’s a different kind of story now. I mean they look amazing, but I always wonder how they have time to look like that in between shows and fittings.’ With this current crop of it-girl/models, as soon as they and their iPhones are awake they are working. ‘They get dressed to just get up’ says a bemused Winberg who, as the eternal gamine, lives in jeans, flats and a make-up free face. Fashion show audiences were in awe of the Amazonian supermodels of the 1990s, Naomi Campbell in particular was known as an independent, outspoken female long before this new wave of feminism made it ok for models to be. Growing up amongst this generation of models who weren’t afraid to show their strength, Winberg has never been afraid to speak her mind. Yet she is aware that this outlook is not always compatible with a life lived through a lens. She knows many people have a private Instagram account as well as public one, yet does not want to filter herself in this way ‘Often I’m stupid because I post something I think is funny and people are like “How could you say something like that?”, so now I just tag my friends and don’t post it’. Fans want successful women with relatable personalities yet they are feeding the behaviour which suppresses this. The message here, that you must filter your personality to be successful, is one even outspoken women such as Winberg have found it more comfortable to fold to. Women just starting out in this industry will not dare speak out for fear of alienating those in charge.

She is shrewdly aware of the trickling hourglass that is a model’s career-span, ‘I think you need to plan the next step, you can model for a long time now but it won’t be every day.’ Having settled in London permanently with her partner, she now has the opportunity to undertake longer projects, ‘I think it’s fun, I love working with the same people for a few months which never used to happen’. You get the feeling that for Caroline Winberg every endeavor is undertaken with enthusiasm. This affectionate, courteous woman builds families at work alongside her family at home. Winberg walked for Temperley London’s AW15 show when pregnant, and gave birth to a baby boy last year. What’s next for this Renaissance-woman? ‘I’m in the process of signing with a designer to create a clothing line for kids and there are a few secret TV projects in the pipeline…’ she pauses and laughs, ‘But at the moment I’m happy waking up at six and changing nappies every morning.’ 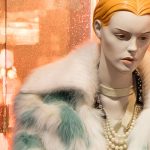 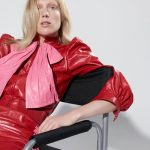