HARRIET MAY covers the rise of Kanye West questioning his influence on the fashion industry and the perspective of young designers.

Feverish adoration, mass worship and unfaltering dedication in the face of disparate evidence; attitudes towards the fashion industry can verge on religious fervour, but to which religion are we committing? Catholicism, a system built on idolatry, could fit an industry that elected Pope Wintour to spread the word of her Bible to a million subscribers each month. Scientology’s penchant for the nonsensical, its indoctrination of celebrities and allowal of only the wealthiest and most sociopathic followers to rise to the top could find a home amongst the fashion elite, though any doctrine which chastises promiscuity and homosexuality as perversions has no place. The chaste teachings of Buddha would bring to an end an industry founded on people’s desire to improve themselves through material possessions, and even a Muslim mid-Ramadan would be astounded by this industry’s dedication to fasting. With sparse opportunities for enlightenment, has the fashion industry lost its faith?

Here we are, the obedient ecclesiastical congregation to the unseen puppet-master Gods of production. In the saturated fashion world, where sociopaths step on sycophants to get ahead, blessing of your talent from above is never a guarantee you’ll avoid crucifixion. Some angels fall to earth but aren’t longed for this world. Meadham Kirchhoff, a brand so venerated it kept international Vogue editors glued to their seats on the often-ditchable final day of London Fashion Week, confirmed their closure in September last year amid rumours of insurmountable debt. Meadham Kirchhoff never compromised their vision to achieve the mainstream, often-faddy success of other brands. They never had their Tiger Sweatshirt (Kenzo), their Gorilla T-Shirt (Christopher Kane), or their Reworked Jeans (Vetements) and despite a Topshop collaboration, their reach did not extend to many of the most devout high street disciples.

When Meadham Kirchhoff failed to meet the rent on their east London studio the landlord locked the door on both their ability to produce and their entire archive. A decade of work was reportedly lost, until hundreds of people began accepting Facebook invitations for a ‘Meadham Kirchhoff Sample /Archive Sale Up to 90% off’ from a mysterious agency supposedly trying to recoup the money the brand owed. Yet Meadham Kirchhoff’s congregation still had faith. They implored attendees to boycott the sale and arguments broke out across the Facebook page. A GoFundMe campaign was set up to donate fifty pieces to various museums.

Heartbreaking destruction of talent is not the product of an industry built around art, love or creation; it is about money. Founders Edward Meadham and Ben Kirchhoff’s eulogy, an archive of hymns to unrestrained brutal beauty, melodies woven into cloth, remains unsung to their flock. Their purity of expression and commitment to portraying their vision without compromise – overlooking critics/buyers/money – in the end condemned them. Money is an earth-dweller, but beauty belongs to a higher plane and perhaps it is fading from this industry. Beauty is expensive and cannot be mass-produced.

So why, when brands are buckling through lack of attention, lack of money, lack of ego, is Anna Wintour sitting FROW at Kanye West’s Yeezy shows? One of the most game-changing and prolific showmen of all time – a man who calls himself Yeezus and released the song “I Am a God” – turns fashion designer and American Vogue’s Editor-in-Chief is sitting up front. This is the type of designer the conglomerates are chasing. Adidas and Condé Nast hook Kanye West (with his $142m net worth and 26.4m Twitter followers) up to their money drip, whilst applauded young designers fight for the one-in-a-million lifeline of a British Fashion Council or Vogue Fashion Fund grant, and dethroned messiahs – Christian Lacroix, Nicole Farhi, Isaac Mizrahi – drown quietly out of sight. It’s not innovation our exalted conglomerates are after, it’s influence.

No one, other than those Reddit contributors hiding behind their Masc-books, seems willing to admit the extent of stolen references in Kanye’s Yeezy collections. Websites sprung up overnight after the Kanye x Adidas debut (Yeezy Season 1); pages and pages of side-by-side comparisons of the collection and the designers Kanye had alluded to. These designers – Helmut Lang, Commes des Garcons, Issey Miyake, Yohji Yamamoto (who collaborated with Adidas long before Kanye swapped ho-ing for sewing) – are unapologetic points of referral for Kanye in both aesthetic and career trajectory. Each, heralded in their birth as an unprecedented avant-garde, has a back catalogue now considered staple pieces in the wardrobes of knowledgeable buyers of classic high fashion around the world. His predecessors’ careers, whether or not you see him as heir, are Kanye’s Sermon on the Mount; a vision of all that could be if only people would take him seriously.

Kanye’s acceptance of prophets who have lit the way before him recognises only the greats. He has rapped that he’s ‘Spending everything on Alexander Wang’, Wang being Wintour’s second favourite child. He fan-girls over Rick Owens and Martin Margiela, name-checking both in his music and various interviews. Margiela has committed to media-celibacy in a way Kanye never could. Never acknowledging the press, Margiela prays in silence and in turn becomes worshiped whilst Kanye Tweets his sermon and gains ridicule.

Perhaps our capacity for inspiration is saturated, after all a miracle performed every day is no longer a miracle. Our bible Vogue isn’t selling like it used to and shops are overflowing with rival religious manifestos. Brashness is the tribe of individuality on Instagram, every picture screams ‘I’m wearing neon PVC bondage gear, I’ve got the biggest platforms, weirdest piercing and I’ve thought of a trend that died with good reason in the noughties to bring back before you.’ The only place we could go after flaunting each decade’s leftovers as ‘vintage’ was to irony. When Anna Wintour described one of Kanye’s collections of torn, hole-covered clothing as “migrant chic” everyone who wasn’t nodding along had their head in their hands. It seems our morals have long since left the catwalk, but let’s at least hope they migrated chicly. No one could seriously hail the rebirth of the ruching and ripping, bagginess and butterflies, of noughties clothing, so current industry favourite Vetements are doing it for us satirically. And at £185 for a t-shirt it’s an expensive joke.

Are we all Insta-damned? Among us dwell a few blessed celestial beings, the Kardashians, Jenners and Hadids of this world. It seems the fewer degrees of separation to Yeezus and his angels, the higher we are elevated. Their names have become insignias, the use of which manipulate designers, magazines, social media and in turn us. The industry serves the conglomerate-employed buyers who are fed not by instinct or beauty, but by tight bottom lines and strict commandments from higher up to sell more more more. Kanye’s reign of cool over the proletariat seems to be unwavering no matter the message he preaches. Glance around Zara on your lunch break and you’ll notice everyone has just returned from Kamp-dashian, a military reform camp for the previously uncool. Their mandatory uniform is a bomber jacket, white tee, frayed hem trousers and Stan Smiths; simple and easy to mass produce, everyone’s fallen off the same conveyor belt.

The only hope for us, the followers and enablers of this poisoned system, is repentance. Follow your own commandments. Go to the sample sales before the designer collapses, you might only get a 20% discount but you’ll get to see 100% more of them in years to come. Donate to Kickstarter funds for young start-ups. It doesn’t have to be just from the kindness of your heart, look for the best incentives and you’ll find discounts, free tees, invites to launches.

Dig out the early-2000s clothes at the back of your wardrobe and flaunt the trends you thought had died at sixteen with your virginity. Wear the originals of those sarcastically trashy (but seriously expensive) designers celebs are flaunting on the red carpet, the looks Insta-kids are spending all their sponsored-post cash on, and that you last saw on Londoners at gigs fifteen years ago. Borrow your mum’s high waist jeans, your dad’s huge Levi’s denim jacket, and a sheer lace bodysuit from your local Oxfam. Your punishment for not affording this season’s Balmain bodysuit is that yours has stains in the crotch and someone perhaps died in it. Your reward? A saving of £1,389, the feeling of donating a few quid to charity shop over conglomerate, and the satisfaction of being a decade more in trend than some of the wealthiest celebs (with some of the wealthiest stylists) in the world. In the absence of faith this may not keep you warm at night, but neither does a lace bodysuit.

Illustrations by Rialda Dizdarevic for D’SCENE
Words by HARRIET MAY 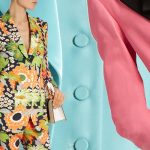 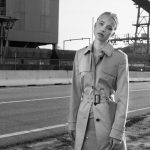