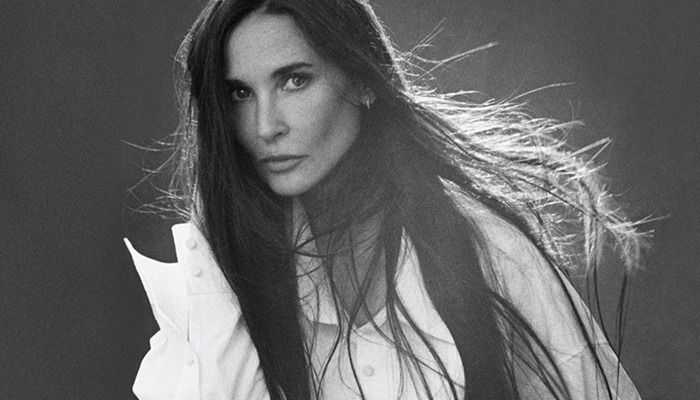 “I do feel really, really good about it. I guess I could say I’m proud” – Moore on her new memoir, Inside Out

Demi on bottoming out (divorce, alcohol and drug relapse, and subsequent estrangement from her daughters) being the impetus to finally writing her memoir:
She had already signed a contract with Harper, but the publisher “gave me the room to step back and go through whatever I had to go through.” That included more rehab and repairing her relationships with her daughters, as well as a physical and emotional recovery from autoimmune issues she refers to only glancingly in the book. “I didn’t really let a lot of people know, but I was very sick,” she says. “My body was shutting down. My organs were shutting down.”

Demi on the bombshell revelation that her mother received $500 from the man who raped her when she was 15 years old (the man who raped her turned to her and sneered “How does it feel to be whored by your mother for five hundred dollars?” The answer, Moore writes: “It feels like you are an orphan.”):
She says she never even really talked about the incident with anyone until she was with Kutcher, which was when she began to understand that what had happened to her had indeed been a rape: “I had always just thought of myself as being stupid for putting myself in that position, that it was genuinely my fault.” Going over it again with Levy, she says, “I remember being struck that Ariel started to cry, which almost took me aback because I didn’t hold it that way. It was a moment of realizing, Oh, wow, I guess that thing wasn’t good, as opposed to, It’s just what it was.”

A decade and a half later, she would star in Indecent Proposal, in which Robert Redford, playing a billionaire, offers $1 million for a night with her character. Did acting out that scenario trigger memories of her rape? “I think literally I shut that out,” Moore says. “You know the compartmentalizing that we’re capable of. You disassociate to a degree. You can almost toss it away.”

Ariel Levy (co-author of Demi’s book) on her reaction to hearing this harrowing story:
“She’s a tough lady,” says Levy. “When she first told me really in depth about the rape, I cried. She didn’t. This is her reality. It’s news to us—it’s not news to her.”

Demi on her body during filming of G.I Jane:
Moore also muscled herself into who she wanted to be—literally, for G.I. Jane, when she bulked up to 138 pounds. “I don’t think it was Bruce’s favorite look…. My neck was huge. My back was huge.”

Demi on her ex-husband’s feedback from the book:
Moore hasn’t yet shown the book to Willis and Kutcher. “I’d definitely like to engage with them before it comes out,” she says, seeming to choose her words carefully. “I have a sensitivity to anything that might make them uncomfortable. I had no interest in anybody being a bad guy.” She and Willis, with whom she maintained a famously amicable post-divorce friendship and who is now married to Emma Heming Willis, remain close: “I was just at the renewal of their vows.” As for Kutcher, who four years ago married his That ’70s Show co-star Mila Kunis: “We have some things that overlap,” Moore says, including an organization she and Kutcher co-founded to fight sex trafficking. “It’s friendly. But we’re not…hanging out.”

Rumor Willis on her and her sister’s reaction to the book:
“I don’t know if I would use the word surprising. It’s more like…. When a whole picture of someone’s life is painted—it made so much sense, to see her whole childhood detailed. It was like having a bunch of puzzle pieces put together.” Willis, who is 31, adds, “Whenever your parents say some- thing like, ‘I was your age once and blah blah blah,’ when you’re younger you go, ‘Yeah, but you don’t really understand.’ It’s hard to imagine your parents as kids.” She says she doesn’t have that problem anymore.

“I feel like I’ve had the privilege to see all sides of my mom,” Willis says. “But I feel like one of the most beautiful parts of her writing this book is everyone who has been a fan of hers or who has loved her for so long will get to see all of those pieces, to see this vulnerable and very beautiful and sometimes intense side that they may not have seen before.”

Demi on deciding to have a co-author – Ariel Levy:
She is disarmingly open about Levy’s contributions: “I wanted it to be a good book, but I didn’t feel like my skill set lent itself to be able to do that”

Ariel Levy on the writing Inside Out with Demi:
According to Levy, after a year and a half of conversations for the book, “I basically wrote the thing. But Demi went through every word, every sentence, many, many times—painstakingly, meticulously. I can write the draft, but she really muscled it into what she wanted it to be.”

Demi on her new habit – Vaping:
Moore begins our interview nursing a venti something or other from Starbucks; she soon has a Red Bull by her side, and at one point she fiddles with a caffeine inhaler. The vape-like device was an impulse buy during a recent trip to the local pharmacy: “They had B12, melatonin and caffeine. So I’m like, I’m going to give it a try!” When the observation is made that she does seem to have an addictive personality, she laughs and admits to “a certain kind of extremist thing,” adding, “and I’m a Scorpio, too.”

Demi on her current exercise routine:
“That would be, like, nothing, right now,”

Demi on what’s in her future:
And her own dating life? “Right now I’m focusing on my relationship with myself.”

She has an indie movie out this fall, Corporate Animals, a black comedy in which she plays a demanding, clueless boss who ends up trapped in a cave with her underlings during a team-building exercise. “I got paid probably the least I’ve ever been paid,” she says, “but I loved the script. And I got to be in a comedy, which I don’t think people generally think of me for.”