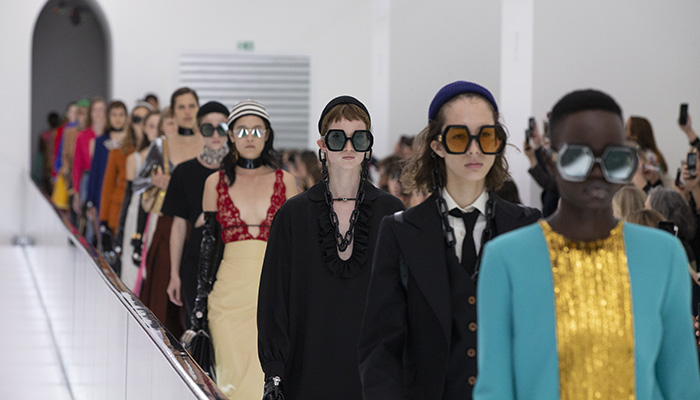 Designer Alessandro Michele presented Gucci‘s Spring Summer 2020 New Forms of Subjectification collection, exploring the resistance to a society that imposes behavioural rules internalized by the individuals, and an idea of fashion as a safe space where the desire of the self can shine, on Sunday, September 22nd, during the ongoing Milan Fashion Week.

“Can fashion fulfill this task? Can it offer itself as an instrument of resistance? Can it suggest experiential freedom, ability to transgress and disobey, emancipation and self-determination? Or fashion itself risks to become a refined device of neo-liberal government that ends up imposing a new normativity, turning freedom into a commodity and emancipation into a broken promise? The line to cross is thin and hazardous. It leverages the transformative skills contained inside every power game. As fashion is part of that microphysics of powers that permeates our existences.

Creating an antidote to normative standardization of biopolitics can’t mean imposing a countermand order to order. It doesn’t mean getting rid of rules imposing other rules. Fashion, instead, has another function: to let people walk through fields of possibilities, giving hints and evoking openness, cultivating promises of beauty, offering testimonies and prophecies, sacralizing every form of diversity, feeding indispensable self-determination skills. That’s the only way fashion can be constitutively resistant: allowing each and every one to creatively build their own place in the world, beyond any normativity imposed from the outside.“