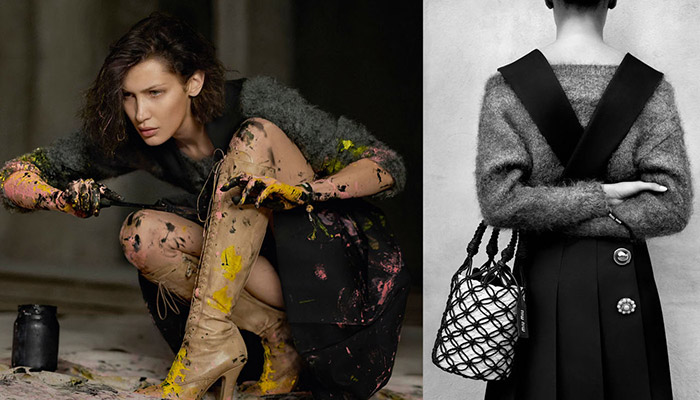 “Imagine an artists’ colony. The colony is all female. The claustrophobic dramas of this colony take place within a sprawling, labyrinthine property; part stage set, part installation, part gallery, part home. Here, the events are hinted at, intimated and obliquely observed in the Spring Summer 2020 Miu Miu campaign.

The mythology of the artists’ colony and its place within the past, present and future, is conjured at the Casa Corberó. Built by the Catalan artist Xavier Corberó, situated in Esplugues, close to the outskirts of Barcelona, his ‘casa sublim’ is characterised by elaborate, playful forms that still adhere to a certain strictness, discipline and utility.

These notions are reflected in the Spring Summer Miu Miu collection itself, where creative freedom and expression – at times spattered and hand-painted, with mismatched buttons, ‘collaged’ ruffles, done and yet undone – is contrasted with the discipline of form, silhouette and utility found in the examples of workwear and the uniform, motifs Miuccia Prada turns to once again. Here it is ‘woman’s work’ that is reflected, both domestic and artistic, in the shape of pinafores, aprons and overalls.”