Trying to navigate the dating scene in the 21st century is by no means straightforward and finding love has changed irrevocably since our parents ‘courted’. The search for that special someone largely occurs on dating apps and social media platforms nowadays, so if you feel overwhelmed by the virtual minefield that millennial online dating has become, then you shouldn’t feel alone. From ghosting to Rossing (we will explain what that means later), there seems to be a whole new world of millennial dating trends and slang words that you need to know if you want to be better equipped for online dating in 2020. You may be wanting to step outside your comfort zone and not date white men. Without being up to speed on the dating world lingo, how can you expect to find the one for you?

So, to give you a bit of help, we have put together this guide that every millennial looking for love in 2020 needs to read before using dating sites for women and men.

While the term fleabagging was originally coined by online dating service, Plenty of Fish, it has become an even more well-known dating trend and term since the 2016 hit show Fleabag. Those of you who are familiar with the show, gifted to us by Phoebe Waller-Bridge, will likely relate to the bad dating choices she made throughout each season. Yet the term itself refers to dating people that we know aren’t right for us!

Even though this sounds like a strange concept to many, research has found that around 63 percent of women and 38 percent of men admitted to dating others that we knew weren’t right for them, and they would have no romantic future with.

Kanye West has received some bad press over the years, and he has also been the inspiration for another well-known dating trend experienced by many millennial online daters. While you may not be familiar with the concept, you have probably been Kanye’d without even realizing it!

If you have ever experienced what expert daters now call a one-sided date, which is where you spend the entire date with the other person talking about nothing but themselves. By the end of your second glass of wine, you know their dog’s name, the paper route they had as a kid, and the name of their supervisor at work.

But as you say goodbye, they call you the wrong name and it becomes obvious that they have no real interest in you whatsoever. If this sounds familiar, then you, my friend, have been Kanye’d.

Watch Out for Cuffing Season!

The next millennial online dating trend takes place towards the end of the year, and with the prospect of a cold winter and Christmas alone, more singletons start to feel more attracted to the idea of having a partner to spend their time with. This sudden panic is often prompted by the desire to snuggle up on the couch watching Netflix with your significant other and has created what has become known as the ‘cuffing season’ which usually occurs from November through to March.

This is often when dating sites are the busiest with singletons looking for someone to spend the lonely winter months with. Research has found that we are more likely to feel lonely during the winter, which explains ‘cuffing’ as the act of jumping into a fall/winter relationship so that you have someone to share the holidays with.

You should be sure to watch out for any exes that creep their way back into your DMs during the winter season who are looking for a potential cuffing partner! 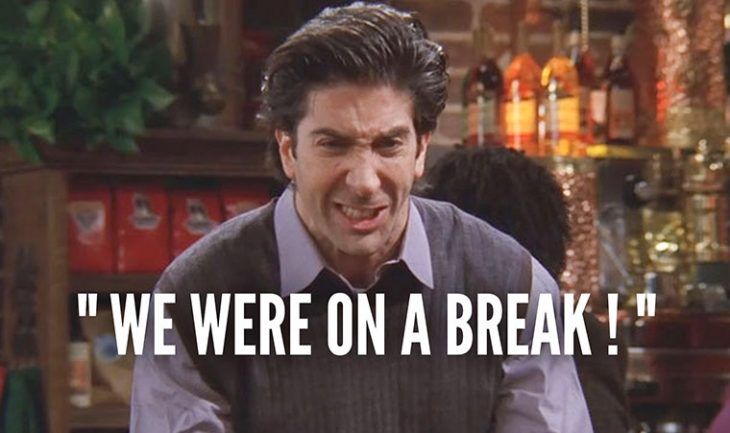 From the infamous plot-line quote “We Were on a Break!” provided to us by the eternally loved TV show Friends, comes this next millennial online dating trend. Even though the sitcom series finished nearly 16 years ago, it is still just as relevant in the 2020’s dating scene as it was when the show first aired.

Rossing has become even more of a problem in recent years due to the ambiguity that online dating has provided around partner exclusivity. For those of you who aren’t familiar, Rossing is when you are dating someone who sleeps with someone else because of the lack of communication in your relationship about exclusivity.

Therefore, if you want to avoid any miscommunications, then we suggest you make your expectations clear to whoever you are dating so that you both know where you stand. That is our top tip when trying to find your lobster!

Long gone are the traditional days of physical forms of dating, leaving the once common stories from those who met their other half in a bar on a Friday night seeming like an ancestry folk myth. It is not easy to navigate your way to finding love through the millennial online dating trends and slang but using this guide will provide you with some of the expertise you need to see you through.