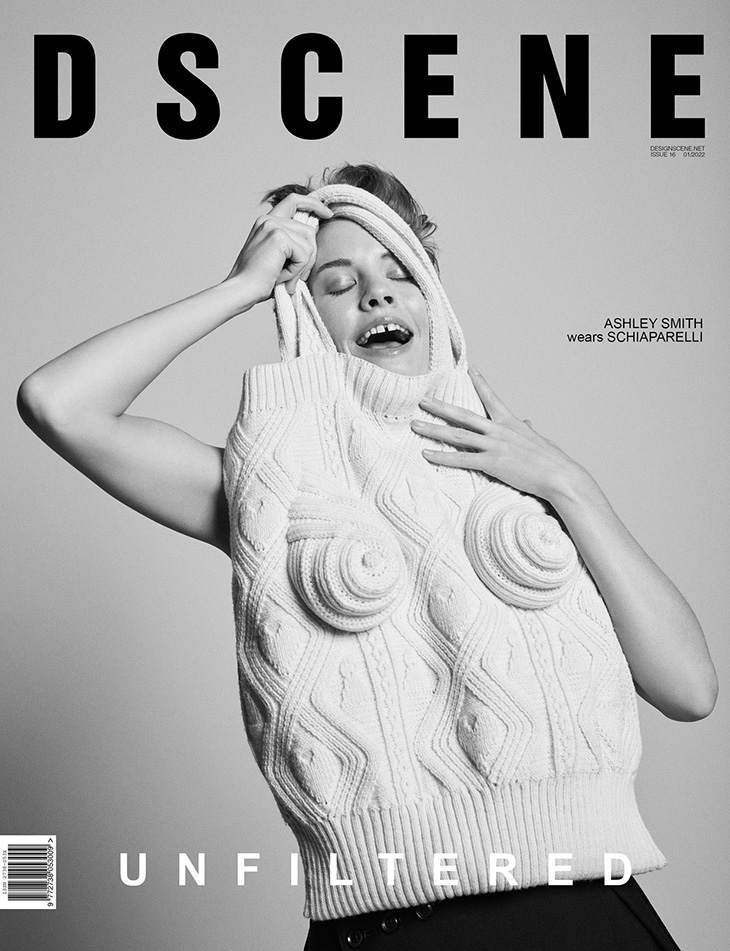 DSCENE No16 the Unfiltered issue features exclusive interviews with finding duos of Ottlonger and Coperni as well as the founders of Annakiki and Dressx.

Continue to see more of the new issue alongside the Editor’s Letter words from our Editor In Chief Zarko Davinic: 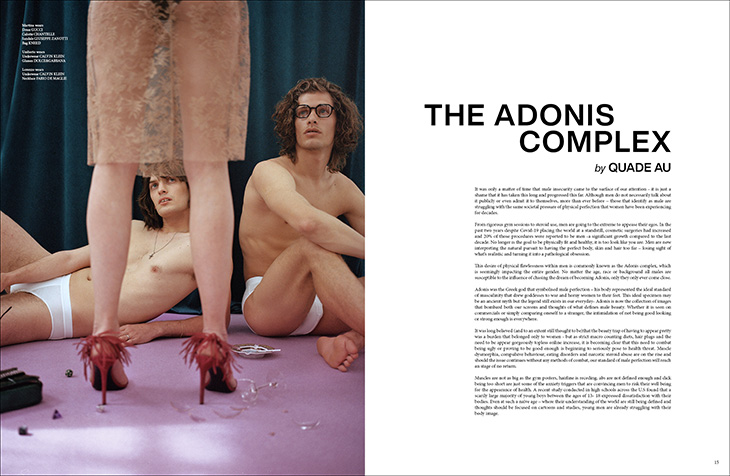 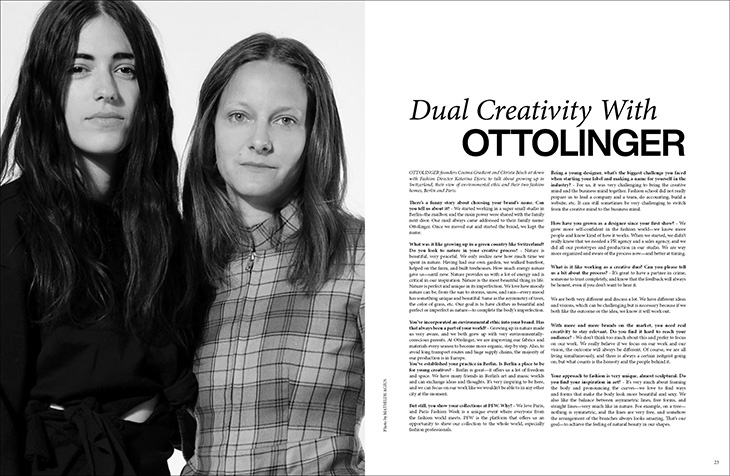 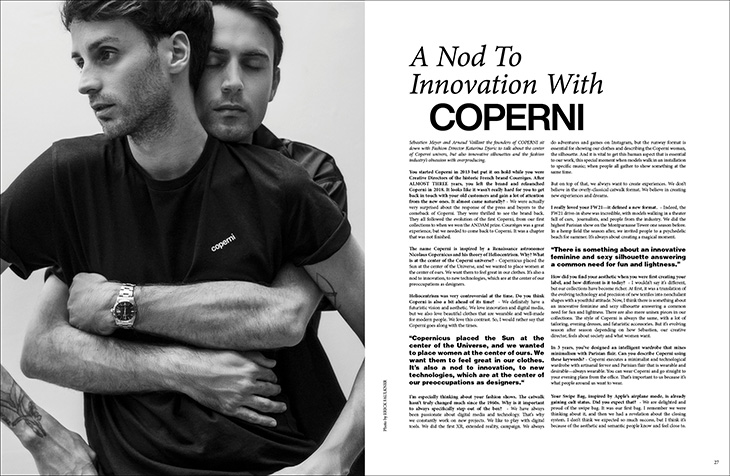 Welcome to issue 16 of DSCENE, which celebrates the art of fashion, and the relationship between fashion and design. These elements have always been at the heart of DSCENE, from the days when our magazine was just a simple blogger page, started more than 15 years ago come April. In the subsequent decade and a half, DSCENE contributors have included a striking number of international creatives who have since started to shape the fashion and design industry. When we started thinking about the new issue, we reflected on the digital world tightened around us even more in the past years of pandemics and lockdowns. In an era of ceaseless digital communication, sometimes it helps to stop for a moment, and opt for more simple enjoyments. Thus our contributors and featured stars as well are true navigators of the era we are living in. 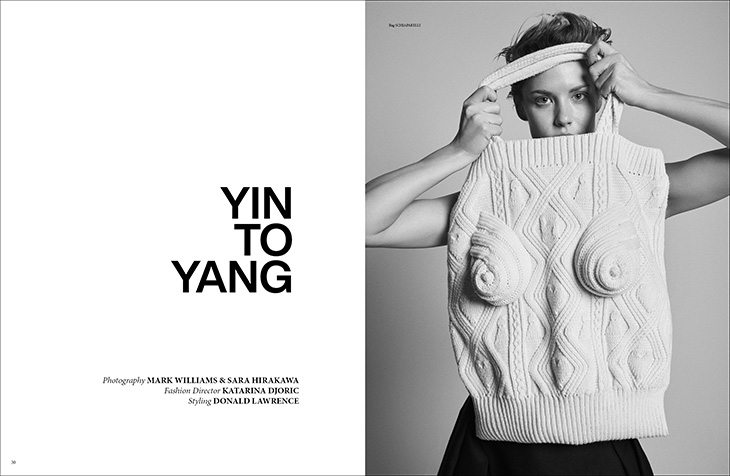 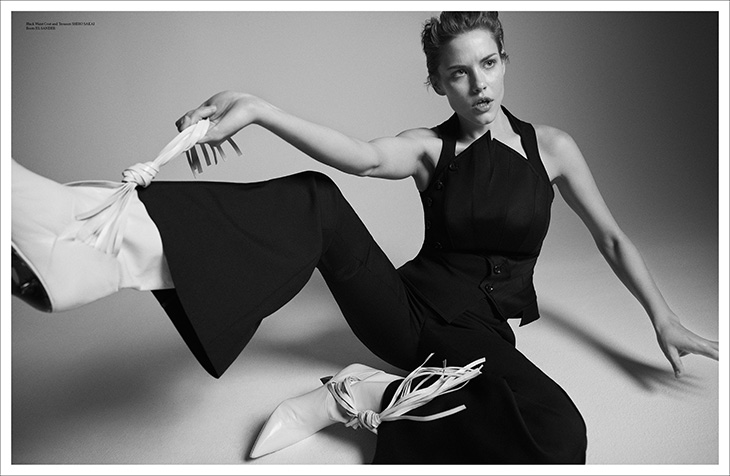 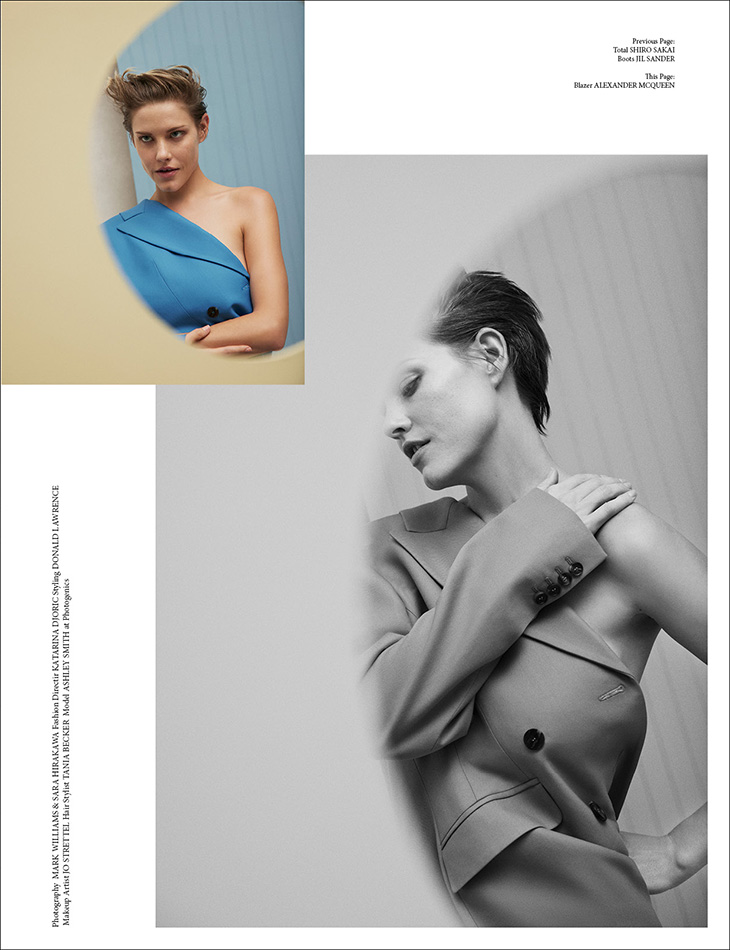 Certainly, Issue 16 of DSCENE tends to be one in which we allow ourselves to dream. Yet, dreams are what made the artists and creatives we are spotlighting today figure out the future in design, fashion and art industries. What is indeed purely coincidental, this issue is also a story of duos. Photography and design duos have shaped a large portion of DSCENE 16. Firstly, we return to our Los Angeles contributors Mark Williams and Sara Hirakawa for a gloriously captured portfolio of the new-season collections shaping our cover story. These standout pieces from the new collections also come alive thanks to the striking cover star of this DSCENE, Ashley Smith. We’ve also taken the time to contemplate the world we are living in, in a gloriously imaginative portfolio by another of our favourite photography duos, Gus & Lo. In a series of videos and photographs they once again stun in their sci-fi like imagery. 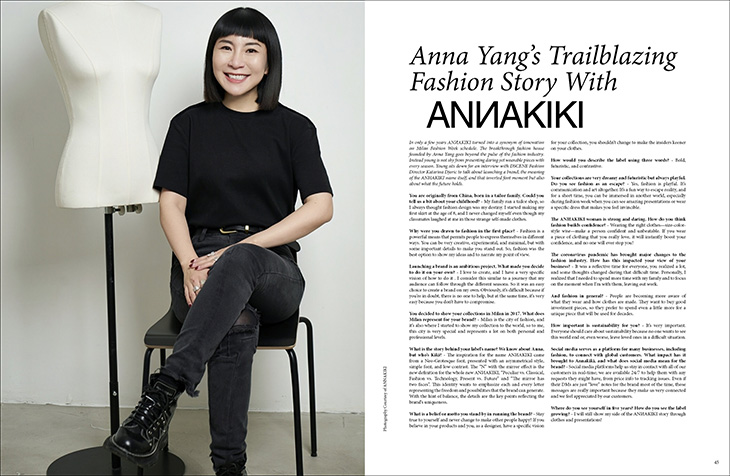 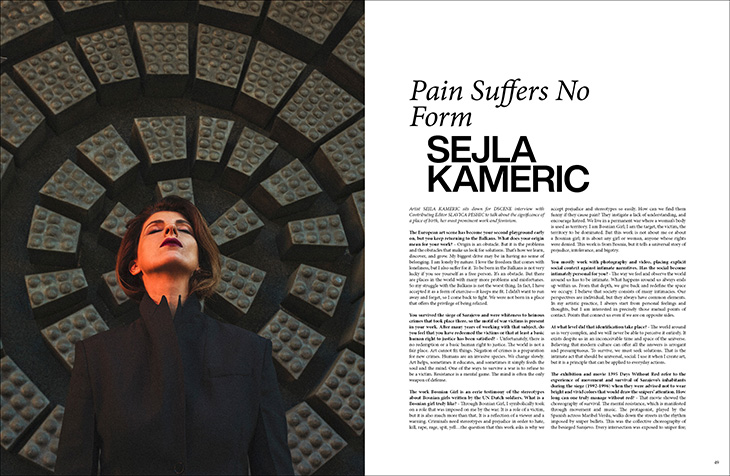 The swift digitisation of our very lives through TikTok, Instagram and Snapchat continues to reshape the perception of the world. Thus for the new issue what we were thinking about were the implications for both designers as well as artists but also those who admire and buy their work. What does it mean for creative industries, this endless replication and instant mirroring of the imagery? Will NFTs put a stop to the freedom we are so used to on the internet? Is it a sign of democratisation, or regulation? Will the global audience still engage in the meta world, where these NFTs might as well push the haves and have nots? In this giant vortex real creativity finds a new meaning, and Daria Shapovalova and Natalia Modenova the founders of DRESSX show us how fashion can thrive in the meta world. While I tend towards the optimistic view of the NFT industry I also comprehend why even young designers choose to emphasise the physical craft of their work. For many breakthrough young designers, while their images influence us in the digital world, their originality is a true manifestation of creativity in the real world. Such is the work of two design duos we were lucky enough to talk with this time. Cosima Gradient and Christa Bösch, the girls from Switzerland behind OTTOLINGER and Sébastien Meyer and Arnaud Vaillant, guys who founded the equally refreshing COPERNI. 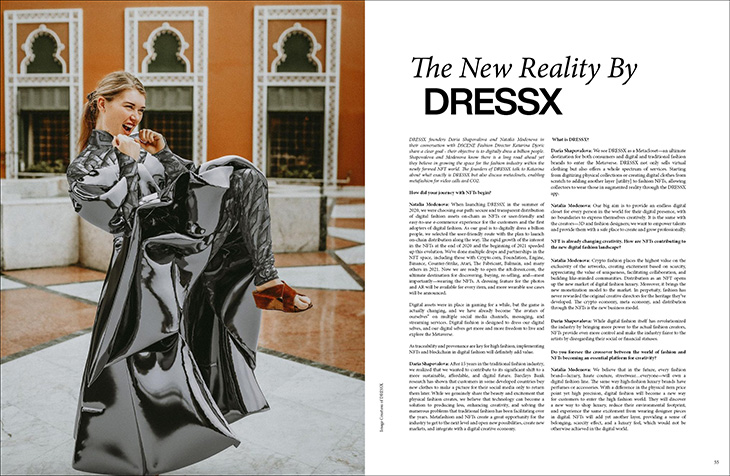 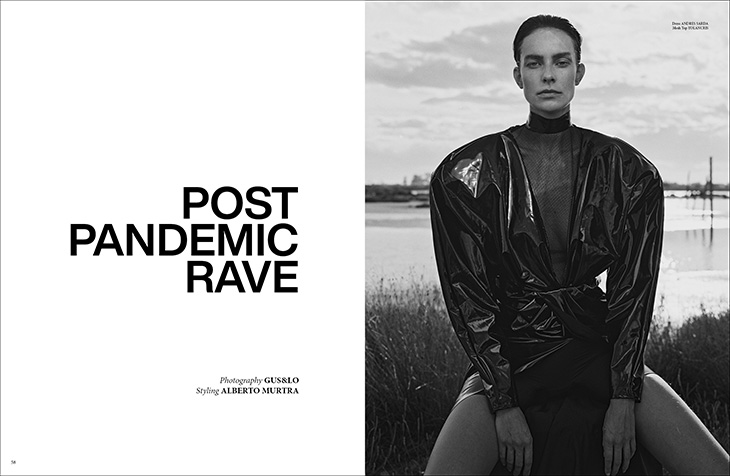 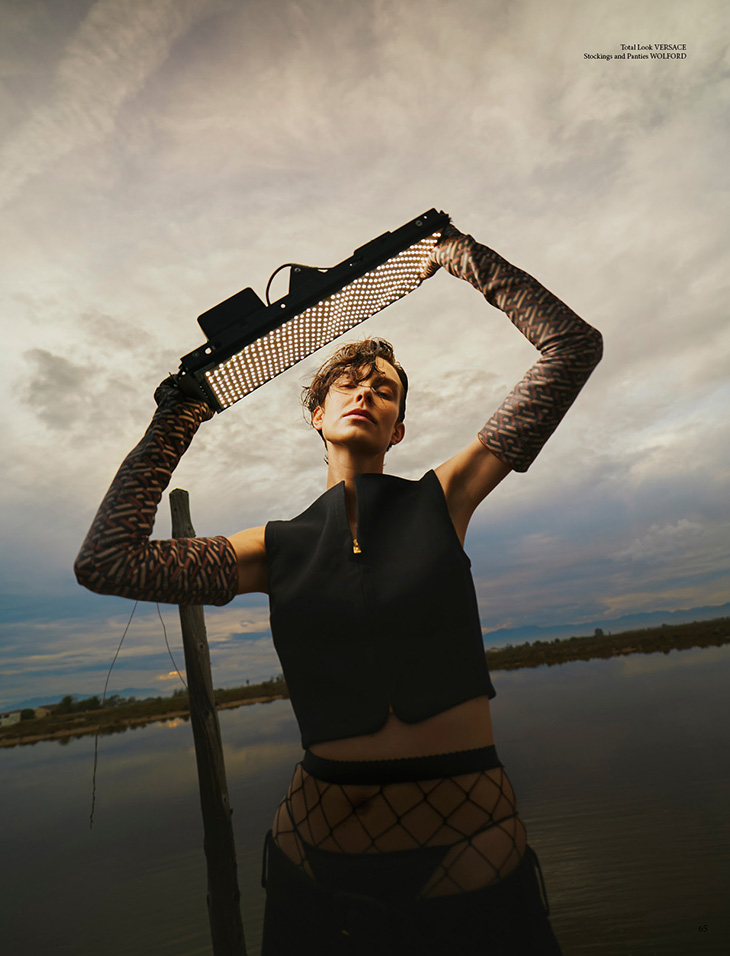 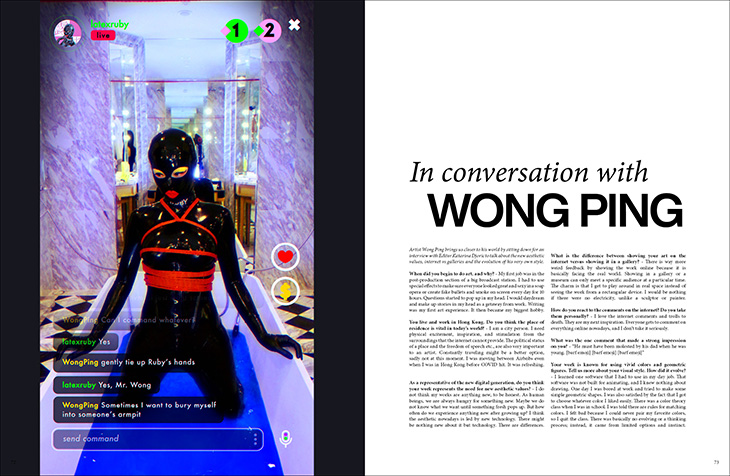 But the story of the digital world mixing into reality is also the one of Anna Yang who created ANИAKIKI. A brand whose presence on events as traditional as Milano Fashion Week helped spread the name and creativity throughout the digital realm. Anna talks to our Fashion Director Katarina Djoric about the road from an idea to an actual living and breathing fashion brand. Another spotlight of the issue is artist Wong Ping, hailing from Hong Kong, he masterfully combines his dominance over graphic design in the digital world with traditional forms such as sculpture. His work tells the story of our time, often in a simple yet efficient manner. 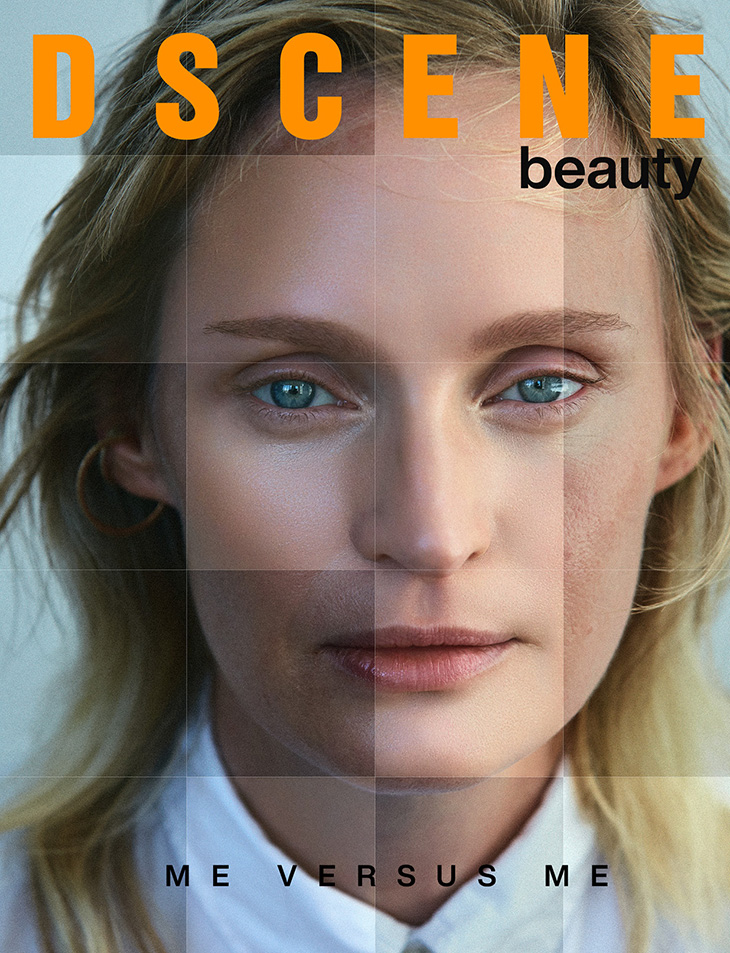 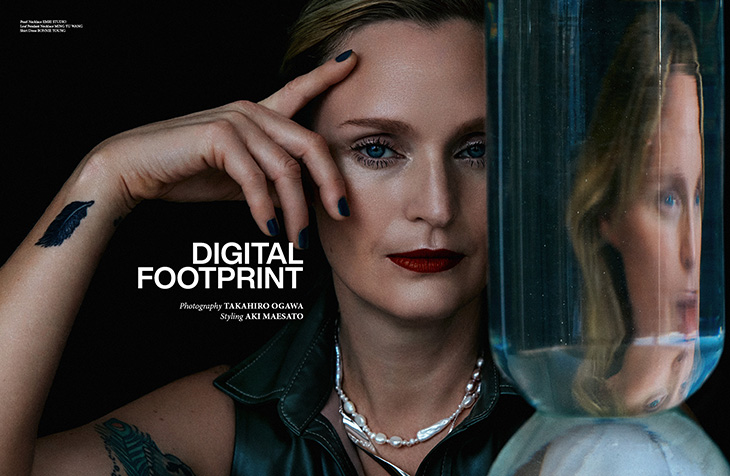 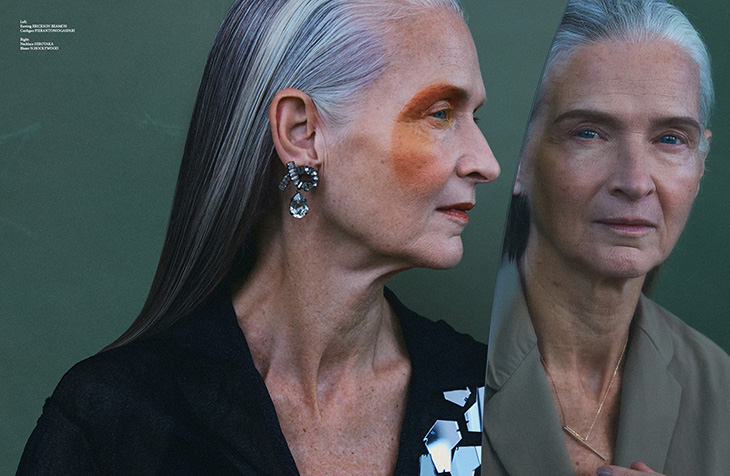 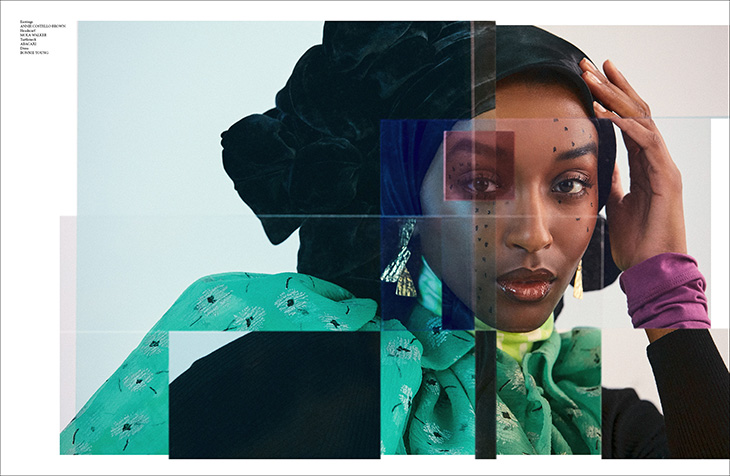 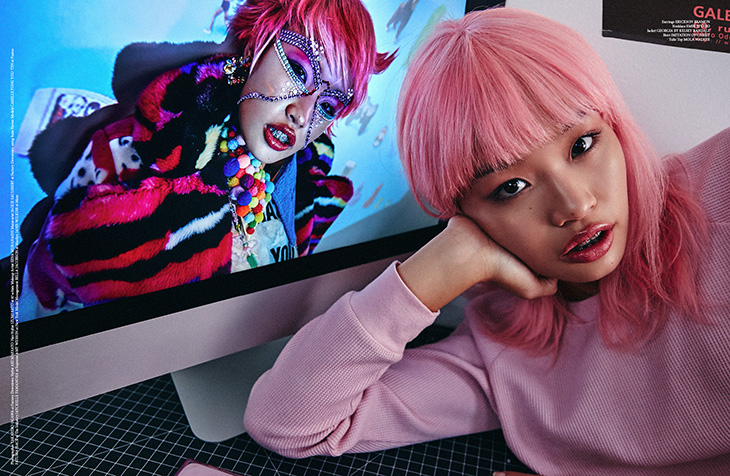 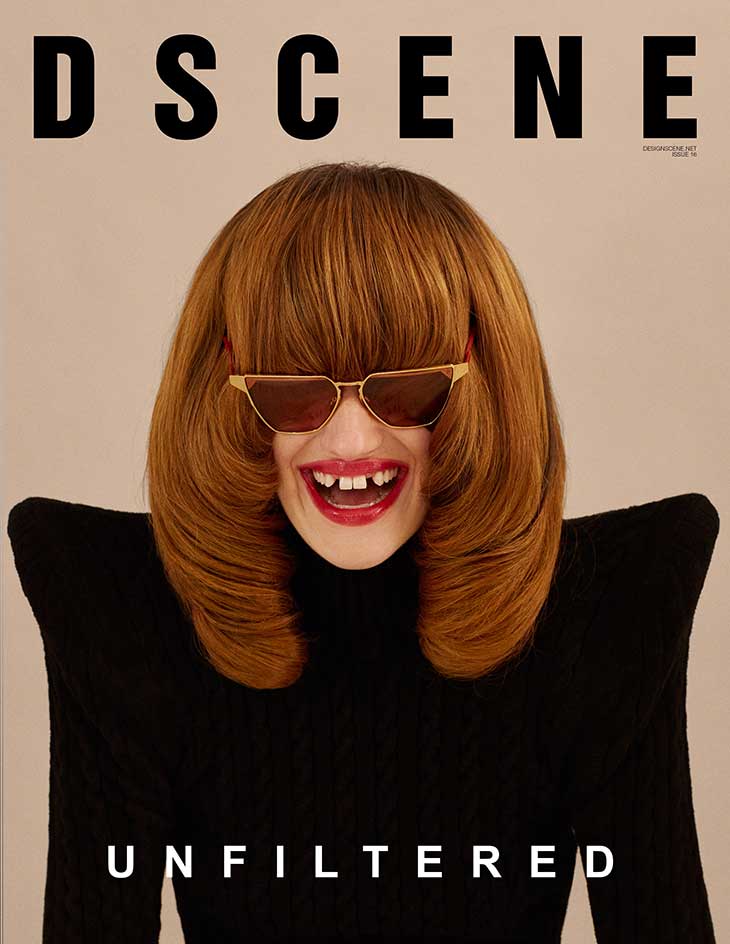 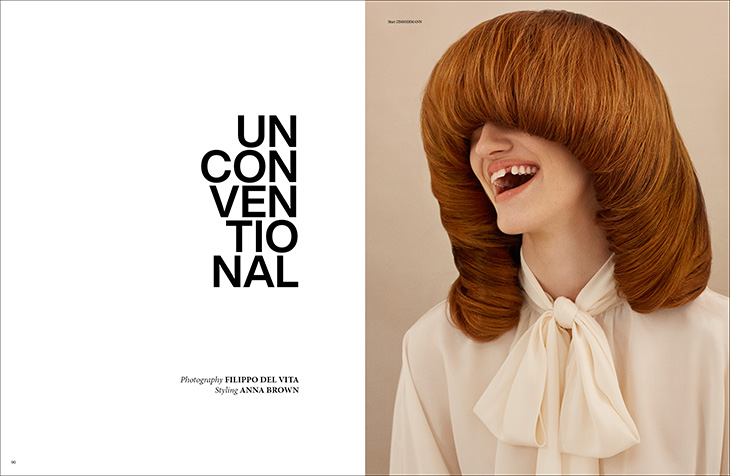 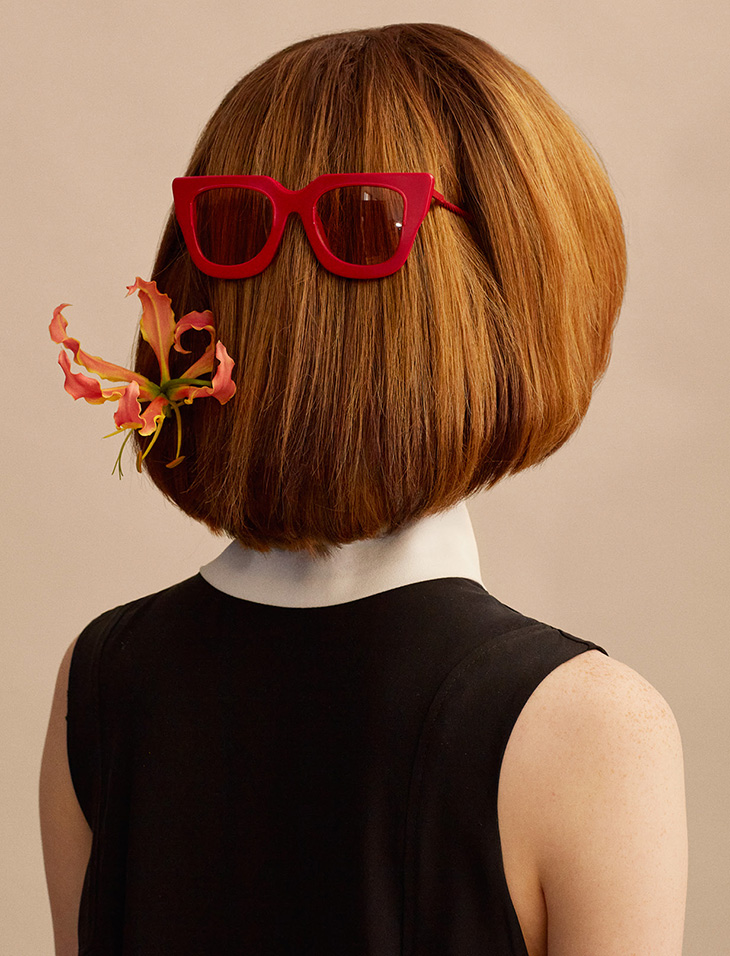 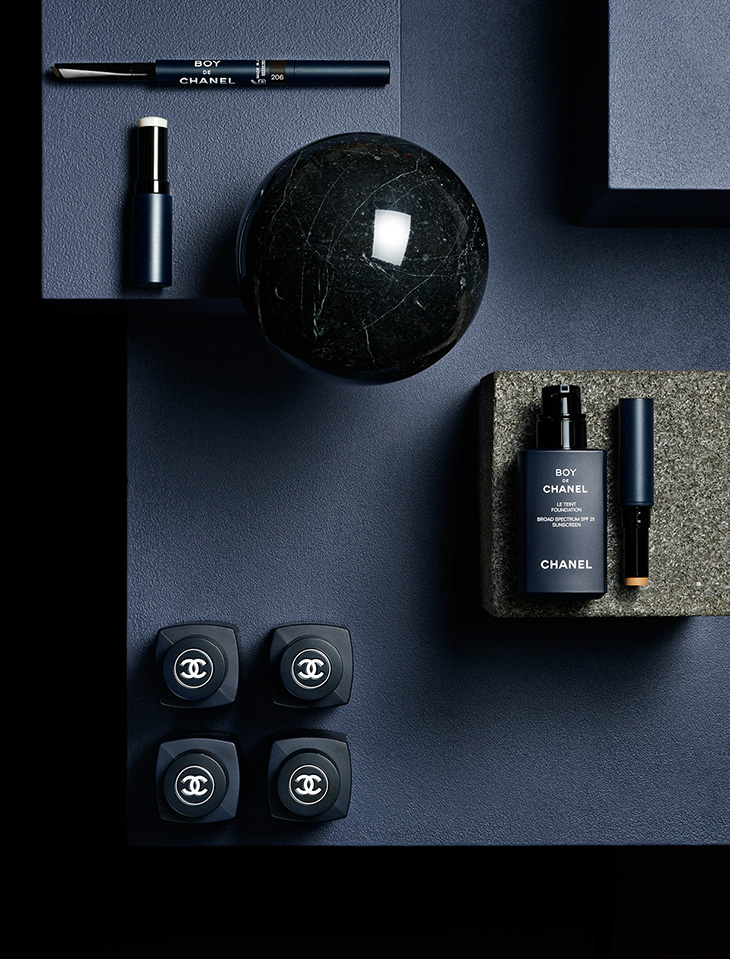 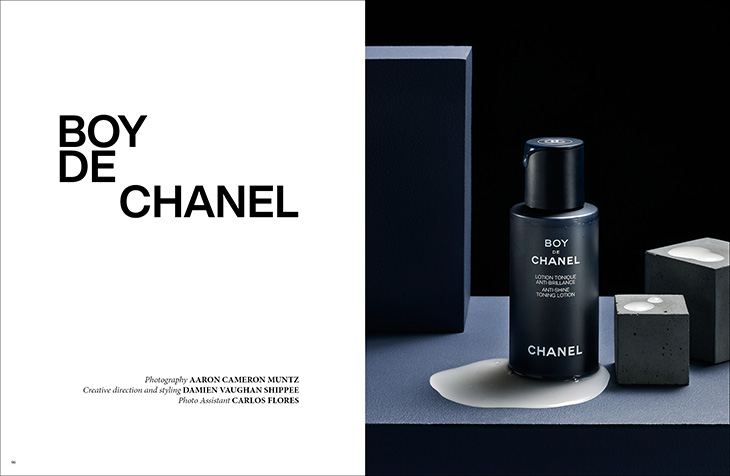 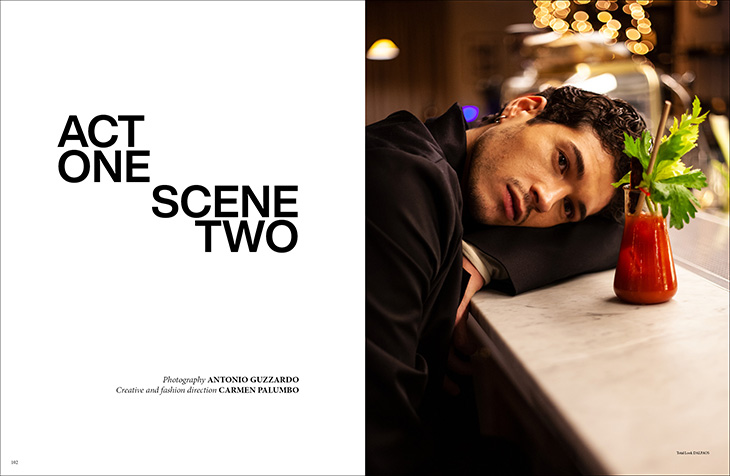 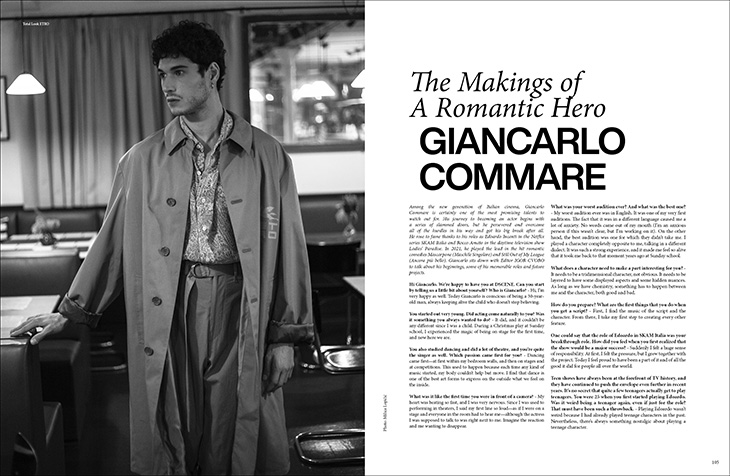 Elsewhere in the issue, Contributor Slavica Pesic beautifully takes us to the world of breakthrough artist Sejla Kameric. We also explore another form of art, one coming from the spotlight in front of the camera with actor Giancarlo Commare who talked with Editor Igor Cvoro in a quietly revealing interview. Every magazine with as many years under the belt as DSCENE depends on a lively conversation, between its contributors and featured creatives. And at DSCENE, that dialogue can encompass art and design, but also intellect and emotion. These conversations often leading to collaborations allow us to explore the outward journeys shaped by our contributing photographers, stylists and writers.

READ OUR UNFILTERED ISSUE IN PRINT OR DIGITAL

Finally, in an age of endless bombardment of information, images turning into white noise, many of us yearn for something different and rightfully so. Here’s hoping you will find such treasures to inspire you in this issue of DSCENE.