Fashion photographer Txema Yeste is a master of the dreamscape. His images are otherworldly, transporting the viewer into a fantastical realm where reality and fantasy blur into one. In many ways, this epitomizes the role of photography in the fashion world: to create an aspirational image that is more about emotion and mood rather than the fashion items themselves.

And it’s safe to say Yeste takes this to the extreme, using elaborate makeup, accessories, production techniques and even digital manipulation to create images that are truly out-of-this-world.

“I think I have a particular approach to fantasy,” Yeste recently told 5ELEVEN Magazine. “I like to create a strong atmosphere, a kind of separation of reality that, at the same time, has a very sense of truth. I like presence, gaze, and creating characters, not just poses that enhance the final product. What really speaks to the public is a story. I’d also say I have a special taste for powerful, striking images that you won’t forget for a while, I hope.”

Over the years, his images have graced the covers of some of the most prestigious fashion magazines, such as Harper’s Bazaar, Vogue, and Numéro. Many critics even proclaim Yeste to be one of the greatest fashion photographers of our time, which has led his work to be emulated by many aspiring artists.

One of the most notable moments of his illustrious career thus far is undoubtedly his “Crossroads” exhibition, which made its premiere in 2019 at SoHo’s iconic Staley Wise Gallery. These works received critical acclaim as they offered a view into a realm of strong and sophisticated characters with powerful and compelling faces and monumental bodies — often in motion.

With Yeste’s camera freezing the action, it allowed the viewer to appreciate the beauty and mystery of each individual.

However, 2022 has seen Txema take on a new artistic challenge, one that weaves together human expression and artificial intelligence to create images that are even more fantastical than before.

Over the past few years, AI has revolutionized countless industries, with the creative arts being no exception. We’ve seen AI create realistic 3D images and videos, generate entire songs, and even write screenplays. So it was only a matter of time before AI made its way into the world of fashion photography.

Discussing the evolving role of AI in fashion photography, Yeste recently said that “It’s not just smart tools helping to take photographs, but also new creative options appearing through algorithms and filters. There will be many new possibilities, for example the combination of pictures through algorithms. There are new horizons in front of us.”

Of course, this begs the question as to what role AI will play in the future of artistic industries, and who will stand to benefit from this technology. In the case of fashion photography, it seems that AI will democratize the art form, making it accessible to a wider range of people.

This is because, up until now, fashion photography has been largely the domain of those with expensive cameras and an eye for composition. Certainly, the staggering improvements in smartphone photography and the rising popularity of visual social media’s creator economy have changed these dynamics.

However, given the improvements in AI’s image synthesis and manipulation capabilities in recent months alone, today, anyone with a smartphone can create images that rival those of professionals – or at least share visual ideas in a similar, if lesser, manner.

Facetune, which is one of the most popular photo-editing apps, has recently added a number of AI-powered features that make it easier than ever to create visuals based only on users’ descriptions of what they imagine. Now, users can generate images through AI text-to-image technology using text prompts alone.

All users need to do is input a few keywords, and the app will generate images that match the user’s specifications. From there, they can choose to use the AI-generated image as a background, turn it into a clothes print, or they can take it to an editing suite where they can make further changes. 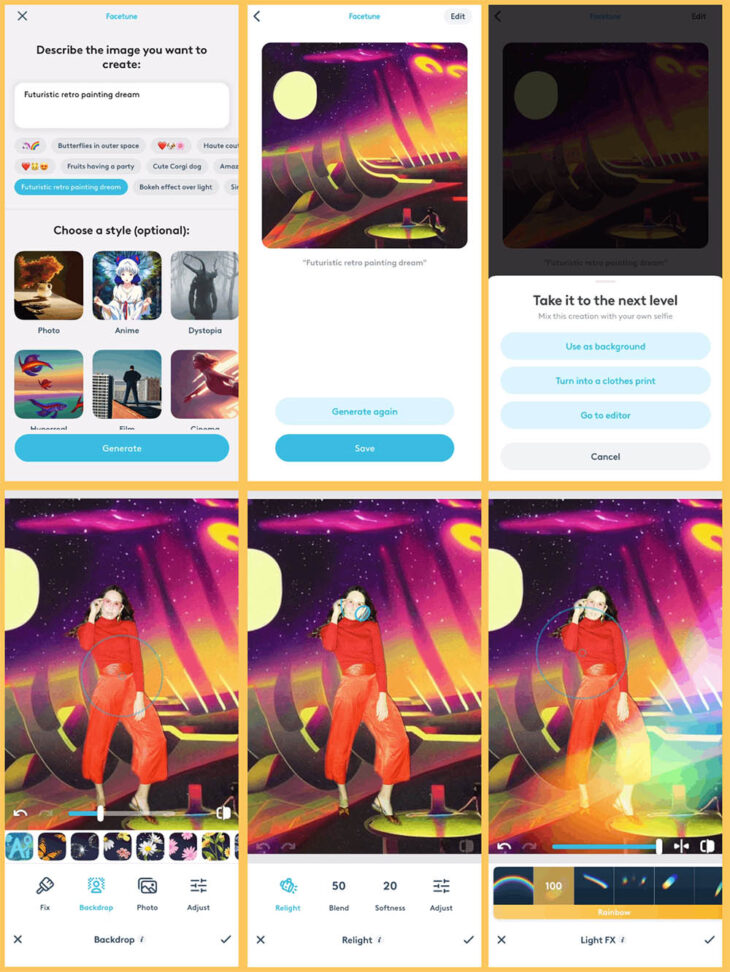 As you can see from the image above, we asked the AI to generate a “futuristic retro painting dream,” which is an obvious homage to the great Txema Yeste’s celestial works. Once the AI created the background, we added a photo to the foreground, adjusted the lighting to match and superimposed a boheh-like flare to tie it all together.

The result is simply staggering, and it’s hard to believe that this was created with nothing more than a few keywords and a smartphone. Of course, it isn’t anywhere near the quality of a production shoot overseen by Txema Yeste, but it’s certainly a viable alternative for budding fashionistas on Instagram.

This is just a taste of what AI is capable of, and we can only imagine the possibilities that will be opened up in the future.

In fact, AI-generated art has already been making headlines in the traditional art world. Just a few weeks ago, Jason Allen’s AI-generated work “Théâtre D’opéra Spatial” won first prize at a state fair fine arts competition, much to the dismay of his fellow competitors and art contemporaries.

What does the future hold for AI-generated art?

Only time will tell, but one thing is for sure: the democratization of art, such as the incredible dream-like vistas from Yeste, is well underway. This breaks down the barriers that have long prevented people from getting involved in the art world, and that can only be a good thing – although there are those who may argue this point.

Nevertheless, it is important to point out that these AI tools are not intended to replace professional artists, nor are they designed to stifle creativity. On the contrary, these tools can (and should) be used to encourage people to explore their creative side by giving them the ability to create original visuals that they may never have been able to before.

If one thing is for sure, it will be interesting to see what creations Yeste will be able to come up with now that he has access to these AI tools. We can only hope that his work will continue to inspire us and push the boundaries of what is possible in the world of fashion photography.