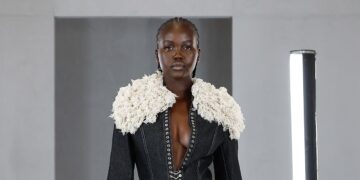 With the Fall Winter 2023.24 Collection, Ludovic de Saint Sernin is inspired by his beginnings as an early teen in the mid-2000s

French designer LUDOVIC DE SAINT SERNIN presented the Fall Winter 2023.24 Collection with a show held on January 22nd during the recently finished Paris Fashion Week. The collection is decidedly autobiographical. It is a contemplation of its namesake designer’s five-year rise from fresh face to fully-fledged creative director. To toast the journey travelled thus far, Ludovic began by casting his mind back to where it all began – as an early teen in the mid-2000s, sat square-eyed before a television set watching FashionTV. It was there and then that he first quietly manifested a future where he would one day be a contemporary of the industry mavericks that flickered on the screen.

His appetite for televised fashion competitions – think Project Runway – served as a key impetus for the collection, with the frenzy of working between his eponymous house and his new Antwerp-based role, inspiring him to charge his team to design a series of thematised capsules – as if each were the week’s challenge in such a show. A homage to the fervent logomania of the era when Ludovic first fell for fashion, and a proud reminder of the brand’s established status, it signifies an expansion of the brand’s remit – a fact that’s expressly felt in the arrival of coats and cropped jackets in real, deep-pile shearling, a first for the brand. – from Ludovic de Saint Sernin

An opening suite of slim, tailored black silk taffeta looks – a high-collared sleeveless shirt; an amply cut trouser; a floor-skimming skirt – establishes common ground between the seething sensuality of LdSS and the brooding severity of the Belgian house he now sits at the helm of. The former tone is further developed in a trio of nightshade stretch leather ensembles that include the debut of a flounced miniskirt and the Cleavage dress – a dramatically abbreviated A-line silhouette featuring a signature laced front. Its bust motif is echoed on the Cleavage clutch, an evening-ready riff on last season’s popular shoulder bag. This sombre passage of the collection is rounded out by graphite denim shirting and the return of the front-box pleated Mirage skirt, as well as a figure-skimming overcoat trimmed with denim ‘fur’. A testament to the experimental flair of LdSS’s well-seasoned atelier, the shaggy fabric treatment – the result of a painstaking process of teasing out the fabric’s individual threads – reappears as a full pair of wide-legged Yeti pants that required a total of three weeks of handwork to create. – from Ludovic de Saint Sernin