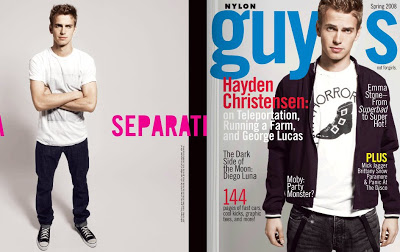 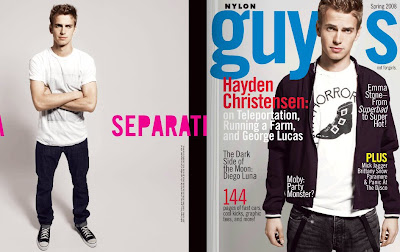 Out in the barn, though, where he keeps his snowmobiles, ATVs, and tractor there’s a problem: One of machines won’t start. Christensen is crestfallen. “Man this really sucks,” he says as he pulls on lever after another on the sleek black machine.”I suppose we’ll have to go on the same one.” It’s a situation that raises an important question: just what am I supposed to hold onto? In the absence of any handles the only options are the actor’s waist or his shoulders. I opt for the latter. Taken from Nylon Guys Spring Issue feature interview with Hayden Christensen.
Last time we had Hayden on a magazine cover, it was for Details magazine, in the longish interview, the Details reporter broke that snowmobile, and yes he also had to write bout Haydens life on the farm and the furnishing Christensen did himself. No worries he did get a ride with Christensen too when the snowmobile broke.

Click on the images above to enlarge. And u can read the rest of the article in the new Nylon guys issue.