Covergirl: Tyra Banks
Photography by Lauren Greenfield
Magazine: The New York Times
In the fall, Banks will have three shows on the air, two of which she created and all of which she produced. Her talk show, “The Tyra Banks Show,” which had its premiere in 2005, is on every weekday and her nighttime reality competition, “America’s Next Top Model,” the most successful show on the CW network, is entering its 11th 13-week cycle. “Top Model,” which pits would-be models against one another, is syndicated in more than 100 countries and has given birth to Banks’s newest venture, “Stylista,” the first show in which she will not appear and which features 11 aspirants competing to become a fashion editor at Elle magazine.
Click HERE to read the full article ate the NY times website. [source/credit Rawbs]
150
SHARES
ShareTweetPinterest 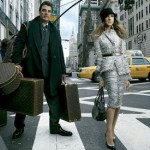