Magazine: Vogue [Italia]
Issue: July 2008
Cover girls: Liya, Naomi Campbell, Sessilee, Jourdan
Photography by Steven Meisel
Vogue Italia is doing it’s first ever reprint with the All Black issue selling out on newsstands everywhere. Apparently it’s the first time Vogue has ever sold out. According to media sources: Italian Vogue has taken the fashion and publishing world by storm by featuring all black models in its July issue. Historically, the conventional wisdom among “those who know” about circulation and newsstands in consumer publishing issues is that putting a black model or celebrity on the cover of a fashion magazine means that it “just won’t sell” well.

But after a couple of New York newsstand sell-outs, reports of frenzied, cross-town searches for $16 to $20 copies and the accompanying hype, Condé Nast has decided to reprint the issue — 10,000 copies emblazoned with the tagline “Most Wanted Issue Ever” and “First Reprint” banded across the front.”

We did feature a whole editorial with ANTMs Toccara Jones, which was a 1st big feature for one of Tyra Banks girls ’till now, in any Vogue edition, Toccara is her all time favorite, full figure model, click HERE to check out the edit. 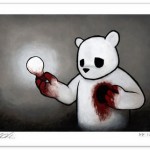