Project: London 2012 Olympic Stadium
Location: London, United Kingdom
Designed by Populous
Website: www.populous.com
The Beijing 2008 Olympics happened less than a year ago, but the preparations for the next games in London already started. Beijing’s Bird’s Nest made quite an impression for everyone who enjoyed the 2008 Olympics so Populous faced a difficult challenge in designing the Olympic Stadium for London 2012. The new stadium will be complete summer 2011 and will host 80,000 spectators during the Games. More images and architect’s description, after the break. More images and info under the break: 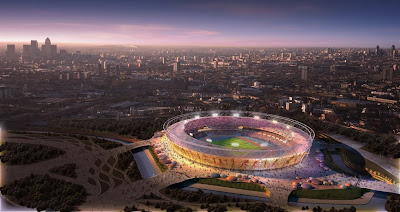 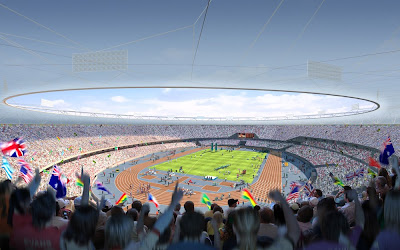 The challenge in building a stadium for a speciﬁc event lies in creating a structure that is both temporary and permanent. This is the essence of our stadium. By embracing the temporary, we have been able to explore materials, structure and operational systems in a completely different way. Each component takes a sustainable approach that uses only what is needed for the event and then transforms to a long term future use, the whole process uses a minimum of services.
The forms are simple but legible, promoting not only the exact, precise nature of the great spectacle that is an Olympic and Paralympic Games, but lending themselves to the eagerly anticipated fun and entertainment of its Opening and Closing Ceremonies.
The articulate, elegant and lightweight structure frames the building ‘wrap ‘. This porous, translucent printed fabric allows the building to breathe naturally, using a minimum of ﬁxed mechanical systems. Through modern printing techniques, we can use the ‘wrap ‘ to communicate to the rest of the Olympic Park and beyond – to the city of London that surrounds it on all sides and the UK.
The design makes full use of the site’s island situation, exploiting it to promote the carnival nature of the event. The water course acts as a natural boundary, with spectator facilities – toilets, bars and food concessions – laid out along the soft water edge. The play of light and water and its ebb and ﬂow will form a vibrant, exciting setting, enhanced by a series of spectator concession pods grouped into colourful clusters.
As seen on ArchDaily