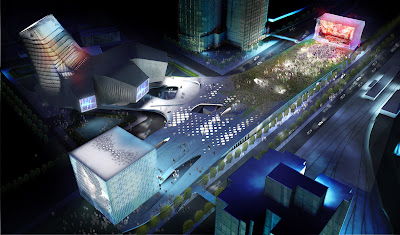 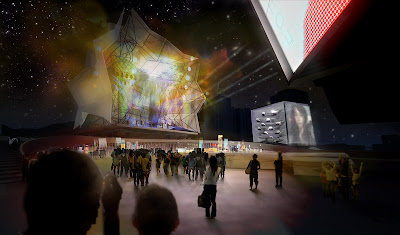 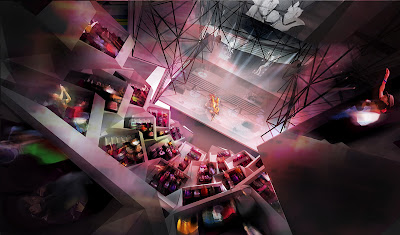 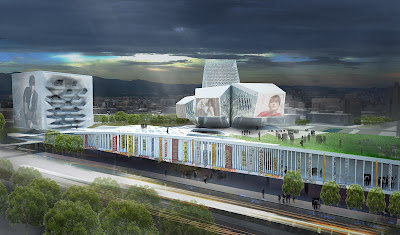 Pop music, while a global phenomenon, is regional in its definition. The Taiwanese Pop music scene typifies the phenomenon; while it crosses borders and cultures and dialects, it nevertheless has produced styles and genres with distinct transnational form and appeal. Though many aspects of pop culture exist in a hyper-technological or virtual realm, there is a need for a defined physical hub dedicated to the production and reception of pop.

The Taipei Pop Music Center features a gradient of mixed-use spaces, from the fully public realm to the interior of the auditorium, allows the visitor to partake of the event dynamic however they choose to visit this complex. Whether they plan a night of music or are browsing the myriad shops, markets, cafes, and restaurants, the complex will be a 24-hour attraction independent of the schedule of performances in the theaters. The TPMC features a new elevated public ground, which bridges the two building sites presently divided by Xinsheng Rd. Corridor. The elevated public space is a pedestrian zone creating a coherent public space distinct yet connected to the life of the city, and effectively joining the three major zones of the complex, the Main Concert Hall, Outdoor Amphitheater, and the Hall of Fame. The public space is in itself a focus for outdoor events, surrounded by cafes, restaurants and shops. Here, the spectacle of pop music can be celebrated and broadcast to the world.

The Main Hall features a 3000-seat indoor auditorium and a tower dedicated to the pop music industry. This hybrid of theater and tower will allow direct communication on an everyday basis between producers, artists, and the music industry community. In effect, this hybrid is a cultural incubator bringing the entire music community, production and performance, together under one roof. The Hall of Fame becomes an ongoing daily destination – an outlet to track the T-Pop industry, linked with performances, hall of fame induction ceremonies, outdoor spaces, and media projections. Within the Hall of Fame is the main exhibition space, digital media center, two lecture halls, and the Sky View Lounge with commanding views from box seats of the entire event space. Lining the street adjacent to the Hall of Fame, live houses provide smaller performance venues and a vibrant street front that is integrally connected to the street life of Taipei.

The form of the Outdoor Amphitheater is a hybrid of circus and city, and with the addition of a mobile stage, The Robot Theater, the design can adapt to a spectrum of event scales, public uses and mass events. The four docking positions of the Robot Theater along the elevated public ground allow for multiple event scales, accommodating a range of audiences from 16,000 people to smaller shows operating simultaneously or with other functions such as day or night markets. In its most compact crystalline form, the Robot Theater docks with the Hall of Fame, creating an intimate performance space for Hall of Fame induction ceremonies and other VIP events. A technological net provides solar screening and LED lighting to the Outdoor Amphitheater, and connects the Hall of Fame, Robot Theater, and Main Hall together.
As opposed to a singular or inflexible performance venue, the TPMC allows both high-end, in-demand performances to coexist with small, up-and-coming artists. This has consequences not only for the diversity of concert-goers that the center will attract, but can also have important collaborative effects on pop music production in Taipei. We envision the Taipei Pop Music Center as a coherent environment, not merely a collection of performance spaces but a vibrant new part of the city itself. As Hollywood is to world cinema so the Taipei Pop Music center will be to Asian Pop. – from Reiser + Umemoto RUR Architecture PC
*Photo | Reiser + Umemoto RUR Architecture PC