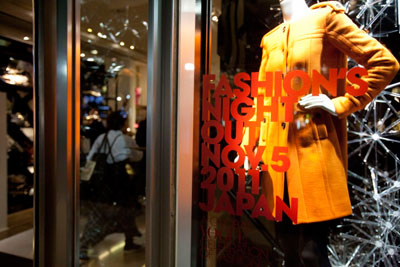 Burberry's Fashion's Night Out Tokyo
Website: www.burberry.com
In a historic move all Editor-In-Cheifs of Vogue magazine rounded up in Tokyo for the Vogue Fashion Night Out, quite a few of them as well as over 2000 guests visited the event at the Burberry Omotesando store in Tokyo. The night was celebrated with a live in-store performance by British Burberry Acoustic musicians The Crookes.

“The enthusiasm and the passion are so inspiring here. The Japanese really enjoy fashion and they enjoy an event, it’s a real thrill to be a part of it. The energy is unbelievable.”  Burberry Chief Creative Officer, Christopher Bailey

View more images from the event after the jump: