Designer Christine Phung presented her spring summer 2015 womenswear collection during the ongoing Paris Fashion Week. The collection celebrates the architecture of women’s body in a sophisticated manner, at the same time pushing the boundaries of contemporary womenswear. The design as well as the materials used are intricate and rich in detail, where Christine had a chance to show how the see through clothing trend of the season can be managed in a refreshing manner.

This is a story about a girl who loves to ride her bike on volcanos. She loves unpredictable and dangerous nature. She loves that rock can become liquid, that the earth’s interior can catapult itself outside, that the earth can melt like blood under the skin when she rides her bike at full speed between the craters. She loves that lava becomes filaments and deposits itself in layers transforming itself in new material that craves to be tamed. Christine Phung rides a bicycle, loves volcanos too but has a predilection on taming shapes. This season she focuses on eruptions of colors and the fusion of different fabrics. Like the rock that becomes liquid in the form of lava , she transforms technical fabrics into cocktail dresses, elastics into framework daytime dresses, craters of colors are a motif for shirts and blouses. She loves the infinite and turns it into dresses. – from Christine Phung.

What stood out to us was also the splendid use of polka polka dot as well as the chic take on the little black dress.

Discover more of Christine’s collection after the jump: 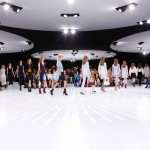 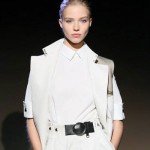