French actress and singer Vanessa Paradis stars on three limited edition covers of Vogue Paris December 2015 – January 2016 edition lensed by fashion photographers David Sims, Karim Sadli, and Inez and Vinoodh. As special guest of Vogue Paris‘ Christmas 2015 issue Vanessa shares with the readers photos from her family album, memories on and off the stage and the way she feels about Paris. Vanessa by Inez and Vinoodh 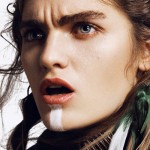 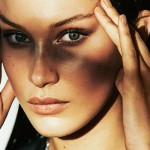