The autumn winter 2016 collection marks the tenth season of Phoebe English. In celebration, Phoebe presents an edited selection of ten looks that reflect the materials and processes of her design aesthetic shown on ten separate and individual characters. The ICA theatre space has been transformed into an anonymous waiting room presented in grey scale as if captured in a black and white photograph. A self-perpetuating, cyclical performance where the models are forever waiting their turn. Almost sisyphean in nature, paths of used tickets are strewn across the floor, evidence that this is a moment that has already happened a million times over. Technical glitches and television static have informed these dishevelled surfaces, which simultaneously peel away from and cling to the body. Hand-made textiles are presented alongside asymmetric draped garments, realised in a palette of black, midnight blue, bright white and deep plum. Phoebe English continues her focus on textiles this season. Purposefully shredded sequins, knotting, knitting with elastic, and a variety of string and silk weaving all play their part in constructing the ten looks presented. Flat, hand torn monochrome silk plays against deep impasto peacock stitching to create a contrast in textures. Liquid plum latex interrupts tightly repeated weaves in simple cotton string. Forms of shredded sequins tightly enclose areas of the body whilst waves of flat cotton fall away from it. This season also sees two collaborations; one with heritage english knitwear company john smedley, which has inspired shrunken knits in felted merino wool. The other, with spanish company hereu, has resulted in handcrafted pebble leather shoes with additional spat covers in navy and black. In the space, an original piece by musician gabriel bruce, who has created a unique soundscape for the presentation. – from Phoebe English

Discover more of the collection after the jump: All Images Courtesy of Phoebe English 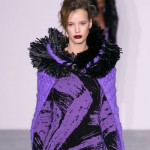