For the 10th issue and 5th anniversary of Hunger Magazine, it’s founder, Rankin photographed supermodel Heidi Klum. Heidi poses in a black gown and bondages showing her dark side.

Rankin already worked with Heidi on 8th Issue of Hunger which is one of his favorite shoots. Running around Hollywood Boulevard with Heidi was nuts. We were calling anyone to be in the shoot, real people and the people who dress up as characters.  Spiderman wouldn’t come down from his lamppost but we paid Batman and the Joker a hundred dollars each to be in one shot. Then we went to a bar called Saddle Ranch, where Heidi got on one of those bucking broncos and they gave us all free drinks. But the picture of her having her portrait drawn (by one of the worst portrait artists in the world, by the way) is one of my favourites. Spiderman in the background just popped up, went back to his lamppost, and then asked for some money. – Rankin 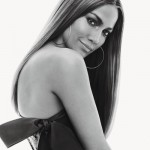 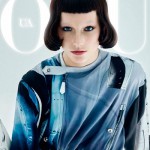