HUGO COSTA presented his Fall Winter 2017.18 collection during the Paris Fashion Week, inspired by a Norwegian explorer of the Polar Regions – Roald Amundsen.

Inspired by reading the adventures of an English traveler John Franklin, he proved the existence of the Northwest passage, whilst living a life ruled by the desire of discovery and unknown expeditions. After being the first explorer to reach the South Pole in 1911, Amundsen aimed to accomplish new conquests. When he arrived from the United States, where he was doing conferences across the country, and also developing his aviation’s skills, he was consumed by wanderlust. In 1926, he was the first explorer to fly over the North Pole and the first person to reach both North and South Pole. Two years later, he disappeared. Starting from the previous background, “AMUNDSEN” is a representative collection of the human being’s necessity to explore the unknown. Thus, it is the urgency for new experiences and adventures, metaphorically represented by territorial explorations. – from Hugo Costa 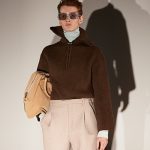 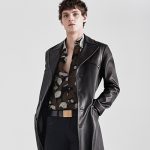