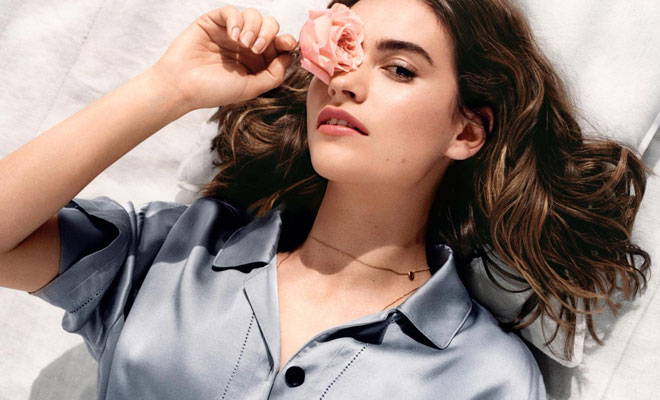 Actress LILY JAMES becomes the stunning new face of Burberry‘s latest fragrance, the newly launched My Burberry Blush. The breakthrough star has long moved on from her Downton Abbey stardom and has three major projects aligned  for 2018 such as a sequel to Mamma Mia but also stars in the upcoming Darkest Hour and Baby Driver currently showing in cinemas internationally.

James has also starred in the epic short film The Thale of Thomas Burberry, which now holds over 15 million views on youtube.

For the My Burberry Fragrance campaign James teamed up with the fashion photography legend Mario Testino, accompanied by the London At First Sight short video.

“Introducing My Burberry Blush, a fruity floral Eau de Parfum with a sparkling twist. Stepping back into a London garden awakening in the first light of day, My Burberry Blush captures the senses as blossoming flowers pop with spirited energy. Created by perfumer Francis Kurkdjian and Christopher Bailey, the fragrance opens with glazed pomegranate and vibrant lemon. Delicate rose petal notes are lifted with crisp apple, while a base of jasmine and wisteria round off the scent for an intensely feminine touch. The bottle is enlivened with a feminine and sophisticated pink hue, reflecting the confident and spirited character of the fragrance. Its signature design details remain with a horn-look lid, inspired by the buttons of the Burberry trench coat, and a hand-tied gabardine knot around the neck of the bottle. The 90ml bottle of My Burberry Blush can be monogrammed with up to three initials”. – from Burberry

Scroll down for the video and more of the campaign below: Find out more about the My Burberry fragrance on our BEAUTY SCENE.