Judges: Isaac Mizrahi, Kelly Rowland and Fern Mallis
Website: www.bravotv.com
Some of the most respected names in the fashion industry join the panel of Bravo’s newest creative competition series, “The Fashion Show.” Internationally acclaimed designer Isaac Mizrahi shares hosting duties with four-time Grammy Award-winning performer and actress Kelly Rowland. Mizrahi and Rowland will also serve as judges alongside fashion luminary and Senior Vice President of IMG Fashion, Fern Mallis. The competition series is produced by 3 Ball Productions and, as previously announced, will air on Bravo later this year.
“The Fashion Show” follows professional designers as they strive to make their mark in the dog-eat-dog world of fashion and compete for a chance to have their designs sold for the mass retail market. The designers will face off in challenges and have their fate determined not only by the professional judges, but also by a studio audience. In the end, the winner will have their designs available for sale by a major retail outlet.
75
SHARES
ShareTweetPinterest

More From: Bravo The Fashion Show 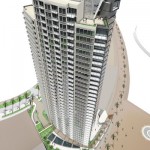