To discover more of Domingo Rodriguez SS13 featuring Robert by Enokae continue after the jump: Menswear designer Domingo graduated from Liverpool John Moore’s University in 2008 and won the Menswear Award at Graduate Fashion Week. He then went on to secure the Harold Tillman Scholarship for his MA at London College of Fashion.

Domingo cut his teeth interning for Kim Jones and Carolyn Massey and has successfully collaborated with Phi-­Nom Leather, Saga furs and Kopenhagen fur. His graduate MA collection for AW10 was scouted by asos.com for an exclusive capsule collection ‘Domingo Rodriguez for ASOS.’ He later won the Wolf & Badger graduate design awards 2010 and his SS11 collection was presented during Paris Fashion week in June 2010 as one of Esquire Magazines ‘7 Brilliant Brits.’ 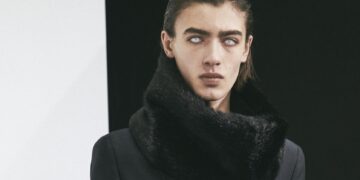