This is the second time this year that Vogue Paris enlists Russian stunner as their cover star, she was also on the cover of their June July 2014 edition. 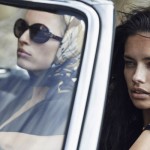 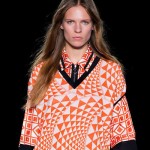