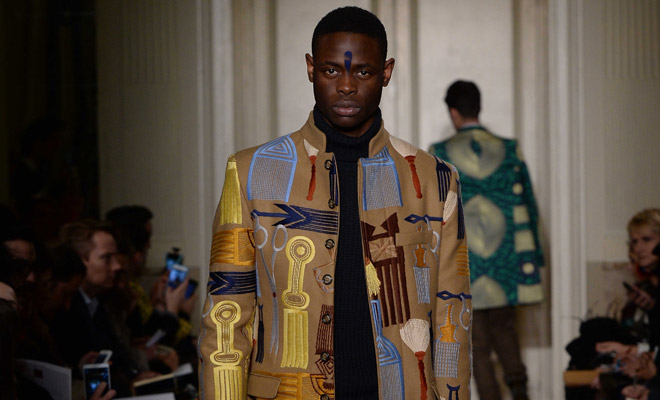 “Stella Jean’s man walks the streets of Rajasthan with a West End of London allure. He is self-confident, but stripped of the arrogance of the colonist. He forgets his rigidity and opens himself to listening and to welcoming the sounds and fragrances of Indian culture, both ancestral and maternal. A culture distant from his, but inherently motherly, one into which he can delve with his soul. A complicate mix of contrasts and dissonances, India is truly a fusion of multiple societies, politics and religions.  Stella’s collection, inspired by India’s majestic and cosmopolitan anthropological background, continuously chases this cultural trompe-l’œil. Textures and matches create a narrative landscape and a new aesthetic in which fashion becomes the (ethical) spokesperson. A spokesperson of counter-colonization, whereby a humble and simple charka – a wheeled wind-winder – symbolises a new form of justice comparable to the oxymoron “civil disobedience” and is more powerful than a Kalashnikov.
In a true cultural symposium, among visions and expressions of worlds distant and in contrast only at first sight, an impeccable aesthetic crasis bringing together India, Great Britain, Cambogia, Italy and Burkina Faso takes place. A backwards Babel if you like.” – Press Release Page 1 of 3
123Next
Tags: collectionsmenswearMFW