Club Ark Eternal” is a tribute to club culture at a time of tragedy. With clubbing spaces obviously needing to be understood and protected, we tried to think of impossible alternatives. With many countries around the world entering a winter of the soul, we wanted to celebrate the kids who go out in 15°F/-2°C. The movie captures the moment when people end up dancing alone, lost in themselves. Maybe they arrived a little early or maybe it’s 6am and the place is emptying. Maybe they withdrew from a packed dancefloor but kept on dancing to muffled music, on a balcony, in a hallway, in a kitchen. The film is a series of solos, some deeply autotelic, some more open and willing to connect. By bringing party lights into Franklin Canyon, the natural world is turned into a club. The presentation is as fitful and irregular as the dances freestyled by the performers and framed by Ryan Heffington. The dances are intended to repel personal or political demons. Dances that aim to seduce or destroy. Rituals of remembrance or oblivion. – from Kenzo 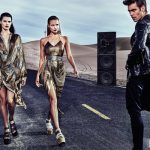 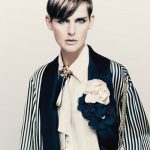