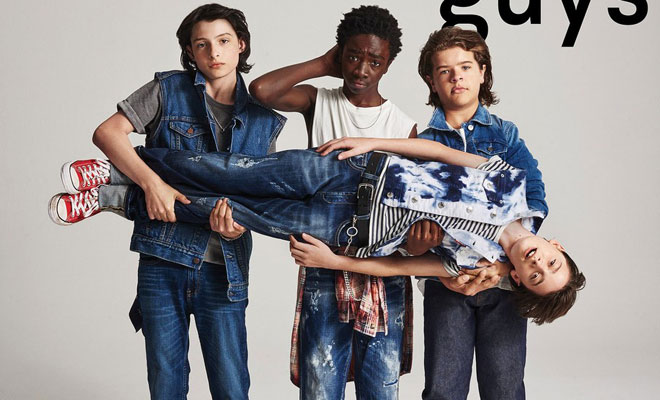 NYLON Guys Magazine is back in the spotlight with the cast of the STRANGER THINGS taking the magazine’s September 2017 cover with a shoot from photographer Sacha Maric at De Facto Inc. in New York. In charge of the styling was J. Errico, grooming handled by Ruth Fernandez.

The Duffers knew that casting child actors, who have a tendency to favor exaggerated performances over naturalistic ones, would make or break their show. “There’s really nothing worse than a bad child performance,” Ross Duffer says. “You couldn’t have any weaknesses, or the eight hours would be excruciating.” Along with their casting director, the Duffers saw what they estimate to be 900 kids, an undertaking they say was easier than it sounds because they could tell within the first few minutes if the actor had what they needed. “You’re looking for something authentic, and most kids don’t have it,” says Ross. “There are the ones that are obviously well-trained, but they feel too Disney, like they’re winking at the camera.” What the Duffers found with their four young male stars were kids who seemed like actual kids. – from NYLON Guys Schnapp was at summer camp when Stranger Things dropped on Netflix. He wasn’t allowed to have his phone, but shortly after the series premiered, one of his counselors happened to check his Instagram account—80,000 followers. The next day it was 85,000. “I was like, ‘Wait, what’s going on?’ I think I was at one follower before that,” Schnapp says. Wolfhard also remembers that odd rush of watching his followers skyrocket and realizing his life was changing right in front of his eyes. McLaughlin felt his anonymity evaporate the first time he was recognized. “In L.A., this kid came up to me and was like, ‘Hey, are you Caleb Reginald McLaughlin?’” he says. “And I’m like, ‘What? You know my middle name? That’s nuts.’” – from NYLON GUYS