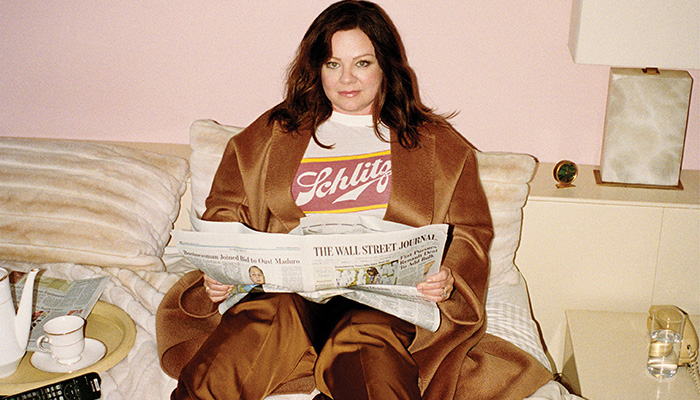 “I’m certainly much more audacious as other people. You get to scream at people or say insane things and not think twice about it. Whereas I would never do that in my real life.” – McCarthy on her IRL personality.

On her morning routine:
She and Falcone have two daughters, Vivian, 12, and Georgette, 9. And so, as a busy working mother, she gets up at 4 a.m. (“I’m like a weird old man,” she says), prepares breakfast, takes out the family’s two dogs, gets her girls ready for the day and then she or her husband drives them to school. “It’s the normal: homework and somebody forgets their violin,” she says, characterizing their life. Tonight, in fact, she will head to a violin recital—her youngest daughter’s first.

On her fashion line:
“I’ve been every shape and size that’s out there, and I just found it harder and harder to find stuff,” she says. “I thought, I’m modern and young and want to wear what every- body else is wearing. Why is this such a strange request?” (Melissa McCarthy Seven7 is no longer in production, but McCarthy is working on a new label. “I just wanted to make it a little smaller and more accessible,” she says. “I wanted to work on keeping prices down and for it to be for everyone.”)

On her rebellious teen style:
Midway through high school, she grew restless and started going out to bars and clubs in Chicago. She began to dye her hair raven blue-black (“I believe it was a Clairol color”) and dress goth. “If Siouxsie Sioux and Robert Smith from The Cure had a baby, that was me,” she says, laughing. “In a way, it was my first time doing a character.” She wanted to study at the Fashion Institute of Technology, but her parents deemed her too wild for New York, so she enrolled at Southern Illinois University in Carbondale. “You’d take these sewing classes, and they were like, ‘We’re going to make a potholder,’”

On her beginnings in New York:
Brian Atwood, a childhood friend (who would later become a well-known shoe designer) from the nearby town of Joliet, Illinois, came to visit her. “He said, ‘What are you doing here? Why aren’t you in New York?’ I said, ‘I don’t know.’ And three days later I moved,” she explains

On the compassion she has for her anti-hero characters:
Her performances are compassionate and never mean-spirited. “We’ve all been some version of that woman,” she says of her challenging anti-heroines. “If you can lovingly shine a light on people’s idiosyncrasies, that’s what makes us go, ‘We’re all idiots, and it’s all OK.’” “I’d be heartbroken to stop doing comedies,” McCarthy says. “That sounds terrible.”

Elisabeth Moss (her co-star in The Kitchen) on McCarthy:
“She’s shockingly normal and down-to-earth,” says Elisabeth Moss, “I feel like that’s said of so many famous people. But Melissa actually is, like, in her core.”

Octavia Spencer (friend and fellow Groundlings member):
“The moment she walked onto the stage we’d all chuckle in anticipation. She was so beloved. The lines were always around the corner,”

Brian Atwood (her childhood friend from Illinois who convinced her to move to NYC):
“We pretty much slept in the living room on a futon that we pulled out,” he says. Atwood understood that McCarthy had a true comedic gift (“She was literally the funniest person I knew”) and that she had to do something with it. McCarthy’s first night in New York, they were in line at a grocery store, and Atwood picked up a copy of the Village Voice and told her, “You’re doing stand-up tomorrow.” He began booking her for open mic gigs at various clubs. He remembers one of her early shows at the Duplex: “She brought the house down. I had chills because we had just witnessed something special.”