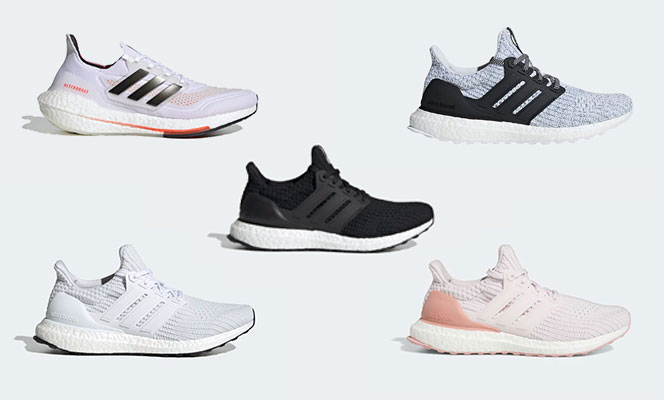 Debuted in 2015 as sports shoes, the adidas Ultraboost quickly became as popular in streetwear style as in performance running. Their iconic silhouette is designed to flow with natural running motion providing the maximum comfort and more energy return.

The shoes have a soft knit upper that offers comfort and ventilation, as well as Boost midsole for high quality performance. “We knew we had to create an upper that could enhance the underfoot feeling to create a holistic, exciting comfort experience.” – Matthias Amm, adidas’ Running department director.

They became widely popular after Ye wore them during his performance at the 2015 Billboard Music Awards ceremony. The triple-white Ultraboosts that he wore sold out instantly, and gained the secondary market price  that was over three times the retail.

The incredible energy return of adidas Boost is created by fusing together energy capsules, giving you the power to keep your feet moving. A part of the Adidas Parley collection, the UltraBoost 4.0 DNA ‘Cloud White uses a high-performance recycled material, Primeblue, made of at least 50% Parley Ocean Plastic. The shoe features adidas Primeknit upper, with a seamless zones offering a stretchy fit, as well as a tree Stripe midfoot cage, sock-like fit, lace closure, supportive heel counter and a Boost midsole.

The adidas UltraBoost 21 ‘Tokyo’ is a part of an expansive collection that celebrates the 2021 Tokyo Olympics. The lightweight runner is dressed in snow white hues, with red accents, including the red dots on the front and lateral sides, “Ultraboost” lettering, and a red line on the sole. All about energy return, the shoe is super comfortable, allowing the extra miles and faster splits. It has a bigger midsole then the previous models, as well as a Linear Energy Push system. It is also eco friendly, as it is made with Primeblue, a high-performance recycled material and doesn’t have any virgin polyester.

The fourth edition of the adidas’ revolutionary performance technology,  the UltraBoost 4.0 ‘Core Black’ comes with an upgraded custom Primeknit upper, and a signature sock-like fit. It also features a lace closure, Midfoot cage with three stripes and supportive heel counter. The all black colorway, is paired with a white boost midsole, and a black Continental™ Better Rubber outsole, making it very fashionable, and easily paired with any outfit.

The highly coveted UltraBoost 4.0 silhouette comes in a spring ready “Almost Pink” colorway. It features Primeknit upper with a sock-like collar and a TPU cage. The UltraBoost 4.0 silhouette goes far beyond the realm of running, as it comes equipped with dual-density 3-D heel counter for a secure fit. It also has a Torsion System that will prevent any for of arch injury, as well as a full Boost midsole and continental Stretchweb rubber outsole for extra comfort. Classic and timeless, the UltraBoost 4.0 DNA ‘Almost Pink’ works with any outfit.

In 2015 adidas has collaborated with a non profit organization Parley for the oceans, starting a long term initiative project with an aim to eliminate new plastic from brand’s supply chain. They recreated three editions of adidas UltraBoost shoe, and a new version of Adidas Originals shoe. The collaboration addresses environmental threats towards the oceans, through plastic pollution. “Through our collaboration with Parley, we want to inspire and mobilize an entire generation to help shape the future of the planet.”. – said Eric Liedtke, Executive Board Member Global Brands, adidas.

Designed by Stella McCartney, the adidas Parley x Wmns UltraBoost 4.0 ‘Blue Spirit’ sneaker is one of the highly coveted models from the collection. It features the knit upper in a soft sea-blue, combined with a black three stripes cage and a white midsole and outsole.