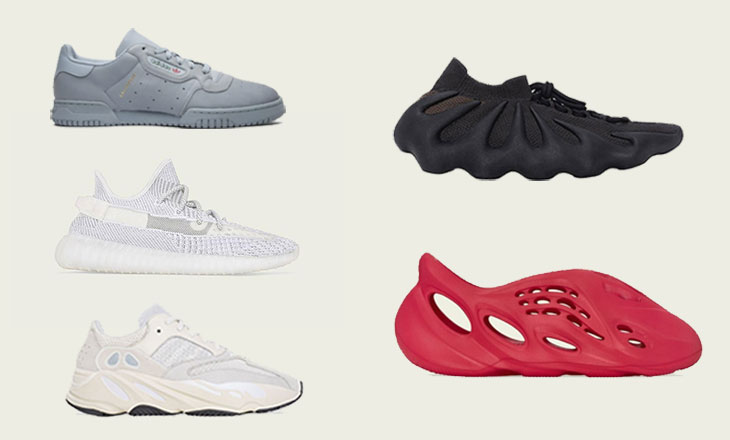 The much hyped Adidas Yeezy collaboration has become popular for its high-end limited edition sneaker releases and Ye’s outstanding designs. The German sportswear giant made a deal with American designer and rapper in 2015, when they released “Yeezy Season 1.” It instantly caught the eyes of fashion lovers and sneakerheads worldwide, and sold out very quickly.

Through popularization by various celebrities, including Ye and his family, Adidas Yeezy sneakers have became extremely influential and highly coveted. DSCENE editors made a list of 5 most sought after Yeezys, from widely popular Boost 350, to futuristic Foam Runner.

In April 2019, right after his Sunday Service Coachella performance, Ye has released the YEEZY BOOST 700 Analog. They were available globally from April 27, 2019 with a retail price of $300, but just like all the other Yeezys, they sold out immediately.

This colorway features a lighter color palette, with a full-length drop in boost midsole. The upper is composed of a cream premium leather with mesh underlays, neutral suede overlays and reflective details on the heel, as well as a black gum sole, adorned with a inevitable Three Stripes.

The official images of adidas and Ye’s YEEZY BOOST 350 V2 “Static” have leaked via various sneakerheads Instagrams at the end of the 2019, and it has been confirmed soon after that the kicks will be released in a limited quantity in December for a retail price of $250 USD.

The sneakers feature Yeezy’s signature BOOST midsole, with a Primeknit upper. On this model,  the “SPLY-350” print has been replaced with a translucent details. It’s snowy  color palette combines the semi translucent white sole, an icy side stripe and 3M reflective hits on the shoe’s rope laces.

Right after the release of the “Cloud White” colorway, adidas YEEZY 450 has arrived in “Dark Slate,” as its blackened counterpart. The futuristic model has one of the most conceptual silhouettes compared to the other YEEZY models.

The shoe’s simple sock-like design is elevated with a ribcage midsole, that adds a dimension to this style. The sock is made out of the woven Primeknit, while the other details include raised ankle collars and a weaved lacing system. The adidas’ YEEZY 450 “Dark Slate” is debuted in Spring 2021 for a retail price of $200 USD. Shop women’s Yeezys at GOAT and Flight Club.

A fan of Crocs Ye, has launched the Foam Runner in June 2020, in a white-based color scheme known as “Ararat”. Since the debut, it has been launched in a series of different colorways, each of which has sold out quickly and hit the dizzying prices on the secondary market. The Foam Runner is the first Adidas Yeezy shoe made in the United States and it’s partially made of harvested algae.

The most releases have been made in Yeezy’s signature muted colors, while the “Vermillion” comes in a very vivid scarlet shade of red. A slip-on type of sneaker, it has relatively simplistic construction, featuring the oval shaped perforations. It was first introduced in October 2021, for a retail pries of $80 (adults), $60 (kids), $40 (toddlers).

The Adidas Powerphase Calabasas was first released in March 2017. Inspired by the adidas trainers from the ’80, this retro model features a premium leather upper with perforated stripes, green Adidas branding, a red Trefoil logo and a gold Calabasas lettering on the lateral side.

The grey colorway was first released globally in December 2017 for a retail price of $120. Adidas then brought back the ’80s Adidas Trainer model that inspired the “YEEZY Powerphase.”