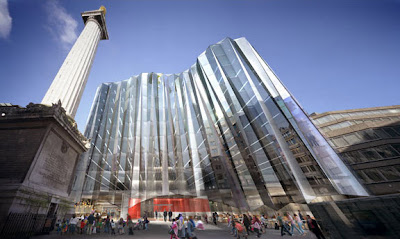 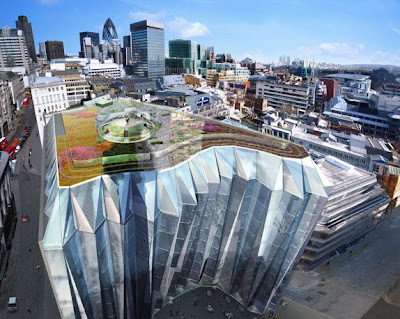 Project: Monument Street
Location: London, United Kingdom
Designed by Make Architects
Website: www.makearchitects.com
Monument Street is a nine-storey project by Make Architects, near the Monument erected to commemorate the Fire of London in 1666. This 9,000m² mixed use development, will take mainly on a new office space with retail and cafe facilities at ground level. The site is near London Bridge on the north bank of the Thames, continue for more images and description coming from the architects after the jump: 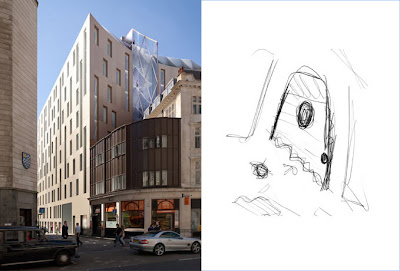 This project posed the fascinating challenge of designing a dynamic new office building quite literally within the shadow of one of London's most notable landmarks. The site lies on the north bank of the Thames near London Bridge, directly opposite the Monument erected to commemorate the Fire of London in 1666.

The nine-storey building offers 9,000m² of efficient, open-plan office space and incorporates retail and cafe facilities at ground level. The distinctive asymmetrical plan is determined by the constraints of the site, with the southern elevation curving gently to address the Monument and define an enlarged and newly activated public square at ground level. This elevation is clad in a faceted glazed facade which reflects the Monument to provide a spectacular backdrop to the new public square. The facade also lifts up at ground level to create entrances to the building and to the retail units on the ground floor.

The roof is landscaped as a green terrace to create a striking fifth elevation which is overlooked from the top of the Monument, with the pillar structure's shadow acting as the gnomon for a sundial set into the roof. – from Make Architects 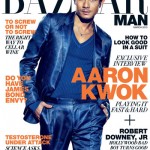 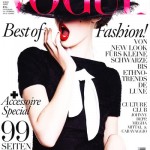