Jonathan Anderson already admired for his eponymous J.W. Anderson label, joins Donatella Versace to collaborate with the designer on a Versus caspule collection set to launch in NYC by April 2013.

Read the official press release after the jump:

Donatella Versace just announced today her new collaboration with Jonathan Anderson for a Versus caspule collection which will be unveiled in NYC next March/April.

Born in Northern Ireland in 1984, Jonathan William Anderson studied menswear at the London College of Fashion, graduating in 2005. He launched the J.W. Anderson fashion label in 2008 with a men’s collection which several years later was accompanied by a women’s collection.

Jonathan won the Emerging Talent Award for Ready-to-Wear at the 2012 British Fashion Awards just a few days ago. – from Versus 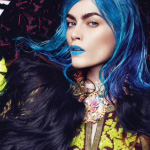