Emporio Armani teams up with photographer Rankin to direct a new fashion film featuring Spring Summer 2016 Collection.  Starring Immy Waterhouse, the film is inspired by the glamour and romance of the Golden Age of Hollywood.

The film is a rollercoaster ride through the drama, romance, glamour and heart-pounding action of cinema’s most captivating era. It harks back to a bygone Tinseltown era of westerns and timeless classics, where everybody was a dreamer and everybody a star. Influenced by the layered pinks and corals of the collection, the movie sees a day in the life of our starlet played out in front of a giant LED screen. A colorful time-lapse epic, from dawn till dusk. It is a trailer-style tale of celluloid heroines, big studio lots and nostalgic musical scores. All captured in a day, through the rising and setting of the sun. – from Rankin 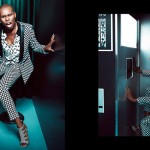