JEFFREY RÜDES presented his Fall Winter 2017.18 collection during the Paris Fashion Week, inspired by the city of Los Angeles and the dichotomy between the mythical patina of Hollywood and the new creative pulse of the city

The collection references both the rigorous, almost austere look of the early 90’s and the glamorous, yet decadent atmosphere of the Hollywood scene, including a nod to River Phoenix and the work of Bret Easton Ellis. The collection encompasses influences from minimalism, grunge and the visual culture of the LA mod scene, celebrating the freedom of aesthetic nonconformism. Each and every staple is given strong contemporary relevance: The peacoat, the shearling aviator coat, the workwear parka, the Spencer coat, the leather biker, the three-button suit. These pieces are interpreted in a unique and quirky way, marrying apparently contradictory concepts: innovative design and timeless style, rigour and freedom, opulence and understatement, Californian edge and European savoir-faire. – from Jeffrey Rudes 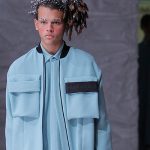 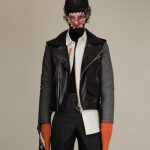