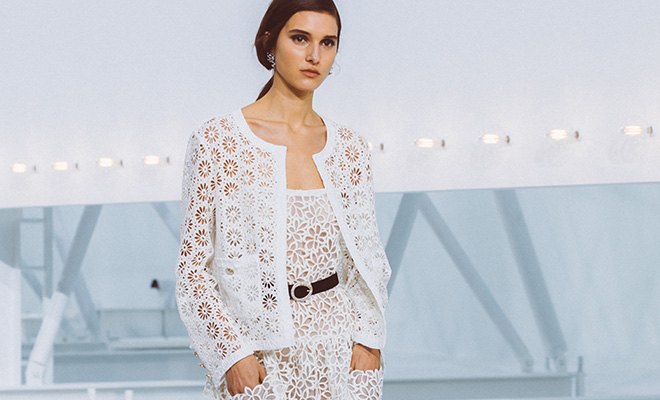 I was thinking about actresses at the photocall, on the red carpet, that moment when they’re being called to by the photographers: their faces a little distracted, their attitude a little out of sync with the outfits they’re wearing. And then there are the fans waiting for them behind the barriers, this very lively side to cinema that happens beyond cinema, that’s what I like. This collection is a tribute to the muses of the House. Some of them are far away, it’s been a long time since we saw them. Gabrielle Chanel and Karl Lagerfeld dressed so many actresses in films and in real life. I was thinking about them who make us dream so much. But without wanting to replicate. Without falling into a vintage citation. I wanted it to be very joyful, colourful, and very vibrant too. – Virginie Viard

Virginie and Chanel team wowed the socially distanced audience at the Grand Palais with seventy new looks. The designer encapsulated the essential Chanel pieces, but also brought back logomania in a refreshing manner. Perhaps Virginie got lucky by bringing back that focus on the Chanel logo, yet a revival of logomania goes beyond this extremely complicated season’s trend forecasts.

Discover all the looks from Chanel Spring Summer 2021 in our gallery: