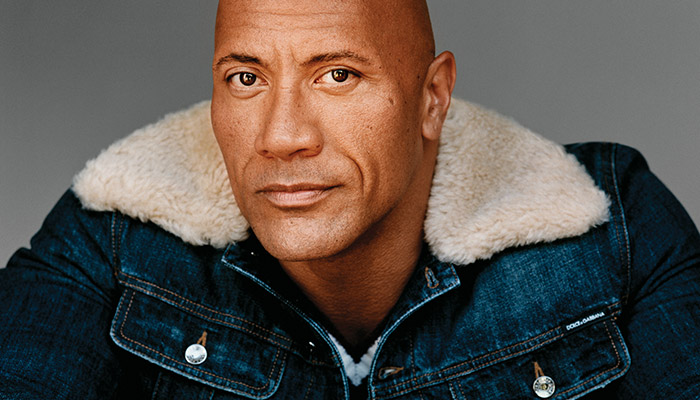 Jumanji: The Next Level star Dwayne Johnson aka THE ROCK takes the cover story of WSJ. Magazine‘s December 2019 / January 2020 edition captured by fashion photographer Alasdair McLellan. In charge of styling was Ilaria Urbinati, with grooming from beauty artist Joanna Pensinger.

Dwayne Johnson on his new wife:
The couple met back in 2007, when she was an event planner at a party for a movie he was filming. “Within 30 seconds, I thought, Wow, this girl’s stunning,” he recalls. “At the time, I was going through my breakup with Dany, and she was just coming off a big breakup too. Ironically, when you’re not looking for something, the power of the universe kind of takes over.” By the time they decided to tie the knot, the couple already had two kids. Was the fact that Johnson’s first marriage didn’t work out partly why he waited so long on the second? “That’s a good question,” he says, seeming to consider it for the first time. “I think so, yeah. My divorce did a number on me. I wasn’t fearful of getting married again, there was just some hesitancy. But Lauren was incredibly patient: ‘I love you, you love me, we have this amazing life together—no presh.’”

Dwayne Johnson on his recent wedding:
They planned it like a special ops raid: top-secret, strictly need-to-know. “We had a full security detail in case there were helicopters,” he says. “But there was no press, no paparazzi. No one knew. I was shocked but so grateful. My life is so loud and noisy; the fact that it was quiet was a big win.”

The ceremony itself was extraordinarily intimate: “Nine adults,” he says. “Tight, tight circle.” The only attendees from Johnson’s side were his close friend and producing partner, Hiram Garcia (Dany’s brother), and his mom—plus Jasmine and Tiana Gia, who were the flower girls. After some Hawaiian and Samoan songs and prayers for blessings from their ancestors, the couple exchanged vows at the highly Dwayne Johnson–ish hour of 8 a.m. As he jokes: “I’ve been up since 4, I’ve got an 8:30 workout—I gotta get this going, get to the part where ‘I do!’”

Dwayne Johnson on his wedding ring:
“It’s big,” Johnson warns, dropping it in my hand. it’s a little cumbersome to work out in, so Johnson is having some alternates made. “One is from a bull’s horn. And the other is from a Tyrannosaurus rex bone.” He grins. “Pretty cool, right?”

Dwayne Johnson on his business decisions:
Johnson’s secret talent is that he’s a suit who doesn’t seem like one. He’s been smart about choosing ventures and partnerships that feel like authentic extensions of his own persona: Under Armour, VOSS water, the new tequila. “I work out, I hydrate, I drink tequila,” he says, smiling. “It’s that simple.”

Dwayne Johnson on social media:
He has 162 million followers on Instagram alone, plus 70 million more on Facebook and Twitter. “That’s the size of a small country,” Johnson says. (He’s being modest; 232 million is the size of a very large country.) “In terms of business, there’s great value and leverage.”

Kevin Hart on Johnson’s work ethic:
“I don’t know how he does it,” says Hart. “The movies he’s back-to-backing are so intense, so time- consuming—to do that plus juggle his TV shows, all his campaigns, his fitness routine, his production company, the people he’s overseeing….”

Tom Rothman, chairman of Sony Pictures Motion Picture Group:
“Here’s the thing,” says Tom Rothman, “He’s a genuinely good dude—and the audience can tell. I would wager that no matter how many people you talk to, you won’t find a person who will say one ill word about Dwayne Johnson. And you absolutely cannot fake that in life. That means that’s who you are.”

Rothman on Johnson’s deal for the Jumanji sequel (Johnson earned a reported $23 million, plus a generous cut of the back end as both a star and a producer).
“Forgive me, because I’m going to be a little glib,” he says. “But the last movie did $900 f—ing million. In this job I get plenty of tough equations: Does that calculus work? This one is a no-brainer. There are plenty of wrestlers in the world,” he adds. “There’s only one Dwayne Johnson.”
Dwayne Johnson on 2020:
When it comes to 2020, Johnson is clear about one thing: “I’m not voting for Trump.” But in terms of the Democrats, he’s not sure whom he’ll support. He mentions a couple of names specifically: “I’ve gotten to know Tulsi Gabbard—we had a really good conversation regarding Mauna Kea,” he says. “And I’ve become good buddies with Cory Booker. I think he’s a tremendous, high-quality person who’s hungry to do well for our country and our people.”

Those close to Johnson on what he is NOT good at:
Kevin Hart: Take running. “He can’t run,” says his friend and frequent co-star Kevin Hart. “It’s not attractive at all. But he doesn’t shy away from it. He’s fine with going, ‘So? I’ve done a lot. These legs are tired.’”

Dany Garcia, ex-wife and co-CEO of Johnson’s many companies:
“He drives himself, always.” As a young wrestler, “he spent so long running around the country— writing down addresses, ‘take a left, take a right’—it took him a beat to finally accept Google Maps. It was our daughter who was finally like, ‘Dad.’ They share locations, and she’d look at her phone and go, ‘Um, he’s very far from where he needs to be.’”

Johnson on finally settling down – and why it’s so important:
Young Dwayne lived in five states before kindergarten, a dozen by junior high, including California, Texas, Florida, Georgia and Tennessee. “It sucked,” he recalls. “I kicked and screamed every time. I would just get settled, and then it’s the anxiety of a new school, new friends. But looking back, I think I learned how to be open to change—accepting and embracing it, instead of being rigid.”

Recently, Johnson and Hashian bought a new property outside of Atlanta, with a small lake he’s stocking with striped bass and carp. The goal is to make it their new base and shoot nearby as much as possible. “In the last three years—and this isn’t hyperbole—we’ve had to move 50 times,” Johnson says. “I’m in a nice position now where we can make sure that a big part if not all of our production is in Atlanta. So that’s the goal.”